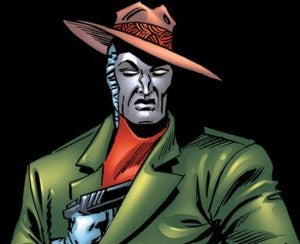 Sony Pictures continues to build out their Spider-Man universe. In the latest article from The Daily Bugle Tumblr, the Big Man is teased. In the comic books, the Big Man was Frederick Foswell, who was a reporter for the Daily Bugle. He also had a secret life as a crime boss, who employed the Enforcers.

Here's the full article from The Daily Bugle.

"Only Time For Super Crime" - By Frederick Foswell

Despite corroborated reports that a central figure has risen to claim greater control over the Russian organized crime families, the NYPD continues to deny the existence of the lazily nicknamed “Big Man.” (Was “Scary Crime Boss” already taken?) Can’t we come up with a more pointedly clever nickname for this hard-nosed criminal?

In the four months since the terrorist attack on OsCorp Tower, violent crime is way up. Everyone’s afraid of everyone. The nuns are wearing bulletproof habits. Cabbies are afraid to HONK. Hot dog vendors are staying INSIDE their carts. I even overheard someone use the word SORRY.

Is this climate of fear a result of the NYPD shifting its focus towards the potential threat of super-human activity?

I don’t know about you, but Spider-Man doesn’t scare me. Nothing in red spandex scares me. It’s time for the mayor’s office to address the real question at hand: Which is a bigger police priority — organized crime or super-humans?

A source who requested anonymity said, “They just want to do real police work, not chase after unicorns, wall-crawlers and giant mutated reptile-men.”

The Amazing Spider-Man 2 is scheduled to be released in movie theaters on May 2, 2013.