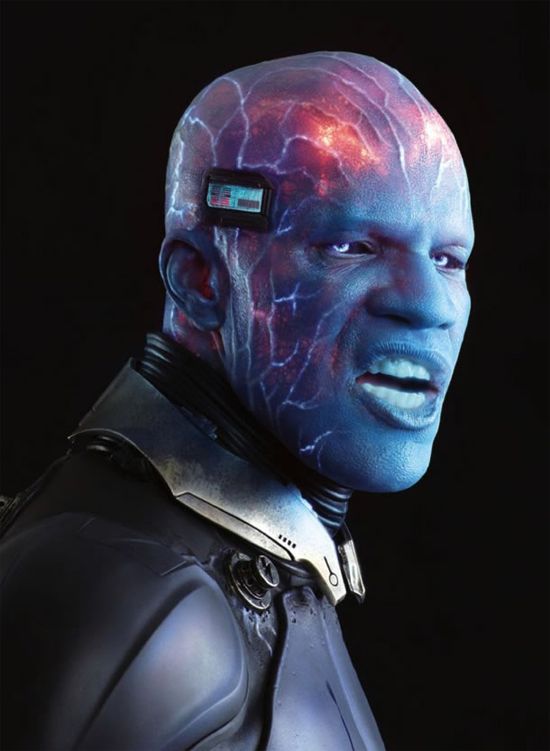 While it's common for fans to record panels at San Diego Comic Con International, the convention organizers and security generally crack down pretty hard on anyone trying to record the footage played on the big screens, especially at Hall H, where major movie and TV studios preview material not meant for the general public.

However, the footage from Sony's The Amazing Spider-Man 2 panel, featuring the Electro-centric footage shown at the convention, has shown up on YouTube from a Jamie Foxx appearance at another event. You can see it below (the footage actually starts around the four-and-a-half minute mark after some discussion about Oscar-winner Jamie Foxx's role in the movie). The video purports to be the first of four parts, so more of the panel will likely be online soon as well.

In The Amazing Spider-Man 2, for Peter Parker (Andrew Garfield), life is busy – between taking out the bad guys as Spider-Man and spending time with the person he loves, Gwen (Emma Stone), high school graduation can’t come quickly enough. Peter hasn’t forgotten about the promise he made to Gwen’s father to protect her by staying away – but that’s a promise he just can’t keep. Things will change for Peter when a new villain, Electro (Jamie Foxx), emerges, an old friend, Harry Osborn (Dane DeHaan), returns, and Peter uncovers new clues about his past.

While the footage is no longer online, here's a description of it.

The Amazing Spider-Man 2 Comic-Con trailer kicks off with a city scene. A truck is roaring down a street with cops in fast pursuit. The truck crashes through a police barricade. The screen fades to black, Andrew Garfield’s voice can be heard saying, “You know what it is I love about being Spider-Man? Everything.” Spider-Man leaps across cars and lands on the hood of the truck.

Spider-Man looks in through the windshield at Paul Giamatti’s character Aleksei Sytsevich (a.k.a. The Rhino). Spiderman says, “Hey, how you doing? I’m Spider-Man.”  Aleksei  yells, “Get off, I’m going to shoot.” As Aleksei is fiddling with a machine gun, Spider-Man appears in the driver’s side window and grabs control of the truck’s steering wheel.

The scene cuts to Peter Parker talking to his Aunt May about doing his laundry. Aunt May says, “Last time you did it, you turned everything blue and red.” Peter Parker responds, “I was washing the American flag, my flag.” Aunt May snaps back, “No one washes the flag.”

The scene flashes to Spider-Man fighting with Aleksei  in the center of the street. Spider-Man pulls down Aleksei’s pants, exposing his boxers, and webs Aleksei to the roadway.

The scene flashes to Max Dillon in an elevator with Gwen Stacy. Max is watching a video of Spider-Man and says, “It must be pretty cool to have the whole world see you like that. I wish I was like him, the Amazing Spider-Man.”

The scene flashes to Spider-Man in action, followed by Peter Parker changing clothes. Gwen Stacy says, “You’re Spider-Man, and I love that, but I love Peter Parker more.” Peter Parker says, “This is my path.”

At Oscorp, Max gets electrocuted, and he falls into a tank full of electric eels, and the tank breaks. The scene flashes to a shot of the Ravencroft Institute, followed by Jamie Foxx as Electro (face glowing under a hood). Electro says, “Soon, everyone in the city will know how it feels to live in my world, a world without power, a world without mercy, a world without Spider-Man. People will see me for what I truly am. I’m Electro.”

After a montage of various scenes, Electro is zapping people with bolts of electricity from his hands. Electro sucks all the power out of Times Square, things go black, then explode. Spider-Man catches a police car that is about to land on someone, and says, “Need a hand.”