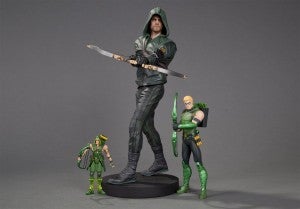 Action figures and statues based on The CW's Arrow and the forthcoming Man of Steel movie are some of the product you can expect to see out of DC Collectibles in 2013, according to a new Q&A conducted on the company's blog.

"After seeing that amazing Man of Steel trailer we are even more excited for the movie in summer 2013," they wrote. "So of course DC Collectibles will be joining all the great licensees in producing some nifty movie product. Look out for 2013 Toy Fair and beyond for more announcements as to what types of product (it would be a good guess that Superman is in the mix)."

On Arrow, they added, "We have a great statue coming in 2013 and if the statue garners strong interest we think action figures would be a great addition in the future. For your Arrow figure fix pick up the upcoming Justice League The New 52 Green Arrow action figure or the 3 ¾” Green Arrow Injustice figure both out in early 2013.  But to your question, no current plans to produce figures based on the TV show."

Of course, it took a while before we got Smallville figures, too...!

They also added that while Jim Lee designed the first wave of New 52 action figures, based on characters from his Justice League run with Geoff Johns, it won't be all Jim Lee, all the time; rather, series artists will have their own opportunity to design some figures for their characters.

"DC Collectibles has always been dedicated to the creative interpretation of the comic artist," DC said. "We love our artist specific action figure lines and continue to celebrate the different artists in our Batman Black and White and Superman The Man of Steel lines. In 2014 be on the lookout for some additional artists besides Jim Lee to get the action figure treatment as well."