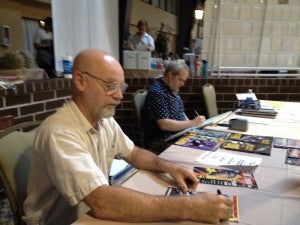 Recently, Thanos creator Jim Starlin reportedly met with Marvel and came away from the meeting pretty pleased. Shortly thereafter, he confirmed for a fan that his understanding was that Thanos would appear not only in The Avengers 2 but also Guardians of the Galaxy.

That he would be in a position to know such a thing is impressive; he stirred up the ire of comics fans earlier in the year by telling them he had not only never been informed that the character would appear in the post-credits scene from Marvel's The Avengers, but also that he had never been invited to any screening of the film. Later, at the Albany Comic-Con, he suggested that it was unlikely he would work with Marvel Comics again.

One assumes that the director's commentary track on The Avengers Blu-ray was recorded before that meeting reportedly happened, so what director Joss Whedon had to say about the comics icon were probably not informed by the fact that the pair may be (in some small capacity) working together in the future, but that didn't stop him from having some very kind words for the veteran writer/artist.

"Jim Starlin wrote and drew a couple of the most important Avengers arcs for me--particularly the Avengers Annual that was followed by The Thing 2-in-1 Annual that contained the death of Adam Warlock and was of course a story about Thanos and his love of death," said Whedon on the commentary track. "For me, those were the seminal Avengers stories. They upped the game visually and textually in a grown-up fashion before Byrne & Claremont's X-Men. I think they're very underrated, and they really opened up my understanding of what you can do with a comic book and so that influence both visually and story-wise is going to stay with me."