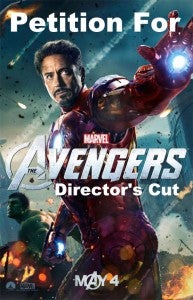 So a couple days ago, we posted what a good idea we thought it would be for Marvel Studios to release an extended Director’s Cut of The Avengers in theaters later this summer and kick old James Cameron to the curb. The Avengers currently sits in the #3 spot on the all time U.S. box office list, trailing only Titanic and Avatar (which have both had re-releases to reach their totals).

We asked our readers on Facebook if they would go see an Avengers Director’s Cut, and the overwhelming response was yes. Little did we realize that there appears to be even more to the story than our wishful thinking.

Since we ran our idea, it has spread across the Internet like wildfire. Some sites have even gotten independent verification from Hollywood sources that it may indeed happen. We contacted a Marvel Studios rep ourselves and put the question to them, and here is the official response we got: “Marvel has an overall policy not to comment or confirm rumor or speculation so unfortunately there are no answers I can give to you.”

So what does this mean? Not really sure. Just to test them, we also asked them about the rumored Black Panther movie, if there were any plans for a Howard the Duck reboot, and if they had considered approaching Johnny Depp to play Dr. Strange. The same no comment response was given for all our questions.

We can’t say for sure if Marvel Studios and Disney will release an Avengers extended version in theaters, and no one apparently can say for sure, because Marvel Studios assured us not commenting was their policy across the board no matter who asks them. However, based on the response online to our original post, Marvel Studios and Disney are missing the boat if they don’t release an extended cut. There are a lot of fans just looking for an excuse to go see The Avengers again, and an extended version would be just the ticket to get them back in for another viewing. Even Perez Hilton thinks it’s a good idea. Not only would it likely help push The Avengers past Avatar and Titanic, but we dare say it could make The Avengers the first movie to cross $1 billion in the U.S. box office alone.

And as far as it possible hurting the DVD sales by releasing an extended version in theaters, we’re pretty sure there is nothing that is going to dissuade fans of this movie from buying the DVD. In fact, it would likely only increase DVD sales. So to help Disney get the message that this would not only make them heaps of money, but it’s an idea the fans love, we created a petition. So if you would like to help us send a message to Marvel Studios and Disney that you would return to the theaters to see an extended cut to help The Avengers take it’s rightful place ahead of Avatar, then please sign the petition by adding your name below.

Start a Petition by iPetitions.com
Start the Conversation

Avengers Director’s Cut: Sign The Petition To Make It Happen