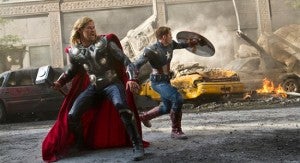 According to Deadline, Marvel Studios and ABC Television are working together to develop an "Avengers-themed" series for Disney-owned ABC.

"The connection to the Avengers franchise would be light as the project is expected to be set in the universe and feature some of its themes and feel but may not include any characters from Joss Whedon’s blockbuster," reports Deadline, suggesting a "high-concept cop show" as a possibility.

The latter sounds like the rumored S.H.I.E.L.D. TV series, and could plausibly be a home for fan-favorite actor Clark Gregg, whose character was killed in The Avengers but who would be the favorite to headline a TV series since his de facto replacement is played by Cobie Smulders, whose Warner Television/CBS obligations (she plays Robin Scherbatsky on How I Met Your Mother) would likely preclude her joining an ongoing ABC series.

ABC has been developing Marvel properties for the last few years, including The Incredible Hulk, which is still in development, and AKA Jessica Jones, based on Brian Michael Bendis' Alias, on which the studio recently ceased work.

Avengers TV Series in the Works at ABC