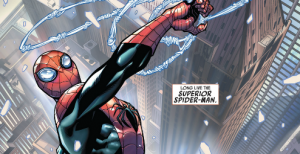 The first full issue featuring Otto Octavius as the new, "superior" Spider-Man hit the stands last week with considerably less fanfare than Amazing Spider-Man #700, but that doesn't mean it didn't sell out all over the country. Avenging Spider-Man #15.1, though, feels almost like it's a story that should take place before the events of Amazing #700, as Otto is in Peter's body, sure...but he doesn't seem all that "redeemed."

"With great power comes great responsibility," Otto says to himself at one point in the issue. "More or less." That's pretty much the approach taken to his characterization throughout.

The story of the Superior Spider-Man is a redemption tale, to hear the creators and editors tell it. Otto is a damaged man who has spent years of his life dedicated to greed and destruction, and now he finds himself obliged to fulfill the dying wish of a man he killed--that Octavius should spend the life he's taken from Peter wisely and make the world a better place as Spider-Man.

This issue goes a long way toward exploring what's been going on in Doc Ock's head since, for the most part, it's been Peter the readers were following during Amazing Spider-Man, even once Otto swapped their bodies. Christopher Yost and Paco Medina, in that respect, give us a great "origin story" for the Superior Spider-Man, but on the other hand it's an origin that seems a bit out of sync with what we saw in the other title.

Medina is the highlight of the issue; while Yost's script is good, it seems so dissonant with the way Dr. Octo-Spidey is portrayed in the final pages of Amazing Spider-Man that it's difficult to reconcile the two and ends up feeling like the two writers are working toward entirely different goals. The art, though, is beautifully rendered, and little things--like Peter's work goggles foreshadowing the changes to Spider-Man's uniform--are nice touches.

Medina also excels at showing emotion, and that's key in an issue like this. They forced an awful lot of plot and character development into a fairly small package here, so the pacing was key and Medina nailed it. Facial expressions and body language, skills that are criminally underrated unless the reviewer happens to be talking about Kevin Maguire, are used effectively here as key storytelling tools.

The spare use of splash pages in such an "important" issue suggests that Medina was more interested in telling the story than re-selling his art at exorbitant prices, and if that seems like a cynical and narrow way to look at things, take a walk through any number of recent "key" issues to see what I mean. It also means that the final splash page, showing off the new Spidey in his tweaked costume thwipping his way across the New York skyline, is that much more effective since its impact hasn't been dulled by a bunch of other big, splashy images before it. 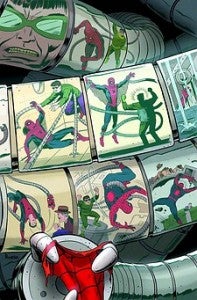 This issue gives fans an odd look at the character's fractured mind, as Octavius finds himself doing things unconsciously--climbing walls when he's lost in thought or clotheslining a thief after having decided not to bother. Many fans will no doubt see this as an "out" for the Superior story, indicating that Peter Parker is still "in there" somewhere, but that seems unlikely. It's more probable that Yost is just trying to convey the way that Peter has affected Ock on a subconscious level--that even when he's not consciously committed to his agreement to be one of the good guys, there's something deep inside that's pressing him toward it. It's an interesting commentary on the character, and a necessary one--because in many other ways Otto is kind of a jerk.

The issue begins with a lengthy and frankly somewhat uncomfortable (for longtime Spider-Man readers) gloat session about how he's finally killed Spider-Man, and the various ways this makes him love life. Shortly thereafter, he transitions into thoughts about how Peter was a chump for not circumventing anti-Spider-Man security measures at work, and that Octavius won't be so polite. Mary Jane, meanwhile, knows too much and must be--oh, nevermind. She's hot. Otto is an unambiguously degenerate and unpleasant character, and this issue drives that home far more than it does anything to convince skeptical fans that he can be redeemed as a new and permanent Spider-Man.

Therein, of course, lies the challenge of Superior Spider-Man; to begin the series with Otto fully good and ready to go forth and save the world would be incredibly out-of-character and would draw criticism. Beginning it, instead, with Octavius as a pretty depicable character with an eye toward a redemption tale creates an environment where Marvel's flagship hero is frankly not a particularly heroic figure; either way, a camp of critical fans will have their way with you.