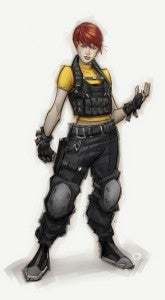 Barbara Gordon will get a new look for her crossover with Batman: The Zero Year...

...which is arguably not surprising since she wasn't Batgirl back when that story happened.

"Around fifteen or sixteen-years-old at the time of her tie-in issue, Barbara Gordon is forced to protect her brother and homestead in anticipation of the upcoming storm," said DC Editor-in-Chief Bob Harras. "It’s here that she’ll not only be forced to evaluate what 'home' really means to her, but where she’ll realize for the first time that she has the potential to be a hero in her own right."

Nightwing will play a role in the story as well, with a pre-Bruce Wayne version of Dick Grayson getting a flashback story set during the time of Zero Year.

"It's a fun story that I pitched that actually follows a night that Dick and his parents are out at the movies. Because of the timing of Zero Year, it takes place a year before Dick's parents died. So I wanted to do something with the Flying Graysons in Gotham City, and something that would be a lot of fun," Nightwing writer Kyle Higgins told Newsarama. "Obviously, things go wrong. A normal night out turns into a very abnormal night out. And it's just a fun adventure story."