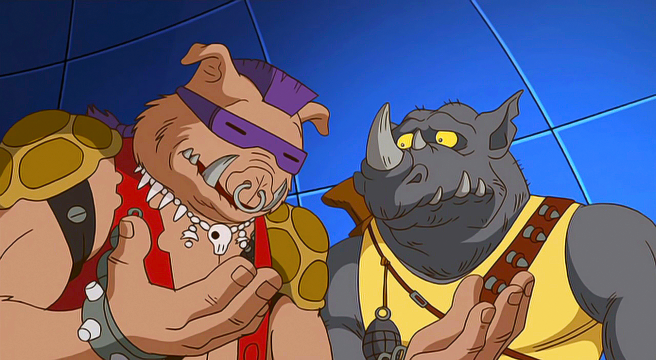 Franchise producers Michael Bay, Brad Fuller, and Andrew Form confirmed with The Omelete (via Collider) that the Shredder's mutated henchmen will appear in the sequel to this year's Ninja Turtles reboot.

"We can say that Bebop and Rocksteady are in the film, and Casey Jones is a character that we love and we're trying to fit him in as well," the producers revealed to the website.

As Collider notes, Bebop and Rocksteady were set to appear in this year's Teenage Mutant Ninja Turtles, with concept art to boot, but were ultimately cut. Bebop and Rocksteady debuted in the Teenage Mutant Ninja Turtles television series in 1987. Once humans in a Foot Clan-controlled street gang, the  duo were mutated into warthog and rhinoceros humanoids by Shredder so that they stood a better chance at defeating the Ninja Turtles. The characters would go on to appear in video and comic book game tie-ins, and debuted in the current IDW comics series last year.

Bebop And Rocksteady To Appear In Teenage Mutant Ninja Turtles 2