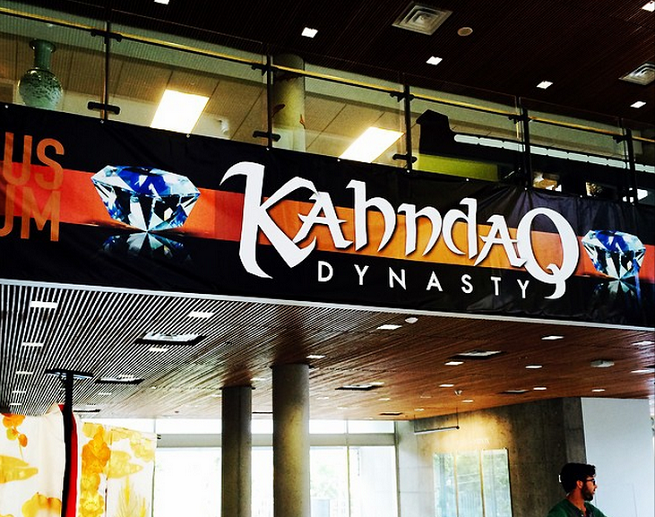 DC Entertainment Chief Creative Officer has one-upped Arrow Executive Producer Marc Guggenheim's recent revelation that Captain Carrot will appear on grocery store shelves in an upcoming episode, revealing that an upcoming episode of The Flash will feature a storefront advertising...something...native to Kahndaq, the homeland of Shazam's nemesis, Black Adam.

The name "Kahndaq Dynasty" sounds like it could be a restaurant, but the signage doesn't confirm that and the presence of gems along with what looks like a storefront location in the mall suggests that the store could be something else instead. Whatever it is, it's likely just a location for a scene, and the fact that it's "Kahndaq" isn't relevant. Still, anytime the home of Black Adam gets a shout-out in live action, it's worth taking note.

Johns, who during his time on JSA made Black Adam one of the most feared villains in the DC Universe, offered no more details other than to confirm that this was from The Flash and not something else.

Dwayne "The Rock" Johnson has been making headlines all week as he's teased whether he might play Shazam -- a powerful superhero imbued with powers by a great wizard -- or Black Adam, Shazam's opposite number and ruler of Kahndaq, a small, fictional country situated between Egypt and Jordan.

Kahndaq has been referenced on Arrow as well, most notably during the episode "Suicide Squad."