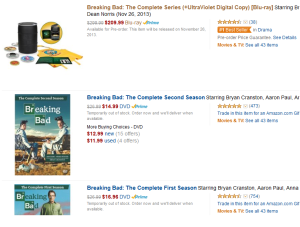 If you saw the end of Breaking Bad, or even just watched an interview during the weeks-long build-up to last Sunday's finale episode, and said, "I gotta get a copy of that!", you're not alone. As of Tuesday of this week, Breaking Bad: The Complete Series Blu-ray box set, in spite of a hefty price tag of over $200, was the #1-selling drama on the online retailer Amazon, while DVD copies of the first two seasons were totally sold out at the online retailer. As of today, those lofty numbers have dropped somewhat, although virtually every season of the hit AMC drama remains in the top fifty in TV and drama DVD and Blu-ray sales. The series finale, which aired Sunday night and wrapped the six-year odyssey of Walter White's transformation from terminally-ill schoolteacher to figurehead of a methamphetamine empire, drew over 10 million viewers--a record for the series and the highest-ever ratings on AMC for any show except The Walking Dead. Star Bryan Cranston is rumored to be in the running to play Lex Luthor in the forthcoming Batman vs. Superman movie. He also played Gotham City Police officer Jim Gordon in an animated feature film based on Frank Miller and David Mazzucchelli's Batman: Year One.