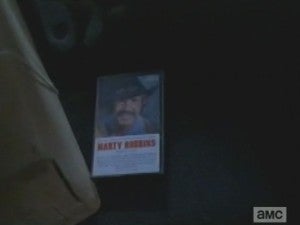 When the Breaking Bad Finale title was revealed as “Felina,” there were a lot of theories about what it could mean. The simplest explanation was that it was an anagram for finale. Another more complex explanation tied the letters Fe to Iron, Li to Lithium, and Na to Sodium to arrive at the message Blood, Meth, and Tears. Iron being the dominant chemical in blood, lithium being the most commonly used metal in the manufacture of meth, and sodium being a major element in tears.

However, the true meaning of the Felina title appears to have been the Marty Robbins’ song El Paso. When Walter White is rummaging through the glove compartment of a stolen car, a Marty Robbins’ cassette tape falls out. When he finds the keys and drives off in the car, the song El Paso starts playing.