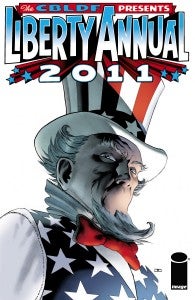 Put simply, censorship sucks. Getting arrested for reading censored comics (whether you know the comic is off limits or not), sucks even more. Luckily, there is the Comic Book Legal Defense Fund (CBLDF), which helps people fight censorship—like in the case of the American that is facing jail time in Canada for reading banned comics. The CBLDF helps protect the First Amendment of lots of folks in the comic book industry—artists, writers, publishers, even librarians and retailers.

And that’s why you should pick up the CBLDF Liberty Annual 2011, a 48 page comic book that benefits the organization. Published by Image Comics and assisted by DC and Marvel, the collection features incredible contributions, including original stories by superstars J. Michael Straczynski (Superman: Earth One), Frank Quitely (All-Star Superman), J.H. Williams III (Batwoman), Steve Niles (30 days of Night), Judd Winick (Catwoman), Mark Waid (Daredevil) and Jeff Lemire (Sweet Tooth), and Carla Speed McNeil (Finder). Look for all-new tales featuring Grendel by Matt Wagner, Cowboy Ninja Viking by AJ Lieberman and Riley Rossmo, and Elephantmen by Richard Starkings and Shaky Kane. Plus: a massive and first-ever full-color story from independent comics master Craig Thompson (Blankets)! Marvel and DC Comics have stepped up to show their support, with all-new pin-ups of Batman by Dustin Nguyen, X-Men by Greg Land, Green Lantern by Ivan Reis, and the Avengers by Greg Horn! It's all topped off by incredible covers by John Cassaday, Matt Wagner, and two variant covers by Frank Quietly: a full-color, 1 in 25 cover, and a black and white, 1 in 50 cover!

Edited by Bob Schreck and Assistant Editor Greg Tumbarello, the collection promises to take a personal look at censorship. Says Schreck, “We wanted to show the human side of what it means to be censored, and we're elated with how many powerful and heartfelt tales were delivered. With an American facing prosecution in Canada for the comics he reads, the work that CBLDF does is more important now than ever, and the CBLDF LIBERTY ANNUAL is essential tool in the fight against censorship.”

Image Comics Publisher Eric Stephenson says, "It should go without saying that free speech is one of our most fundamental rights as citizens of this great country. Our right to free expression is challenged on a daily basis, though, and sometimes, those challenges occur within the comics world. Without the diligence of organizations like the CBLDF, everyone in the comics community would be much worse off. There are always bullies out there trying to keep people from enjoying the rights we're all entitled to, but thankfully there are also people willing to stand up for those rights. I'm proud that Image is able to lend a hand."