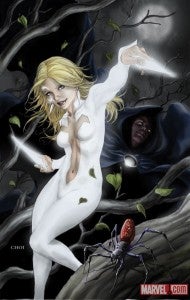 Marvel Comics has announced a new miniseries that will feature the return of Cloak and Dagger. Spider-Island: Cloak & Dagger will be a three issue miniseries by writer Nick Spencer and artist Emma Rios.

According to the Marvel Comics, the storyline will take place in Manhattan during the chaos of Spider-Island. With roughly 1.5 million residents running rampant throughout the city, Cloak and Dagger jump back into action in order to defend a legion of spider-powered New Yorkers from turning on themselves and each other.

“Nick and Emma are two of the most explosive new talents in comics and they’re matched perfectly on with Cloak and Dagger…two of Marvel’s most exciting characters,” said Marvel Senior Editor Steve Wacker. “ This is the definitely the book to watch coming out of Spider-Island.”

Spider-Island: Cloak & Dagger #1 will feature a cover by Mike Choi and is scheduled to be released in August.