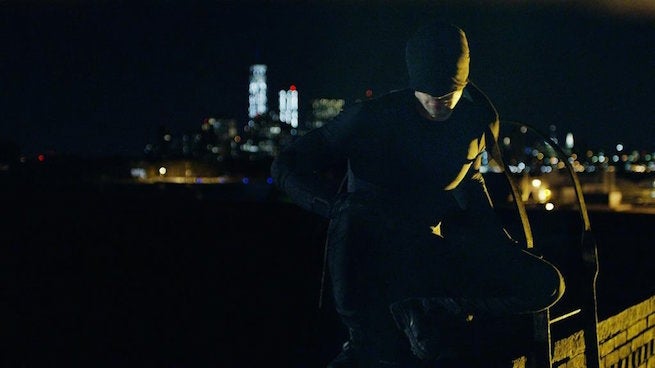 The creators behind Netflix’s Daredevil say they are confident that the upcoming series will be very distinct not only from the 2003 film version but also from other superhero shows on television.

The new series will chronicle blind lawyer/vigilante Matt Murdoch as he transforms into Daredevil and battles ascending Kingpin of crime, Wilson Fisk.

Loeb says Daredevil will be a very localized Marvel story.

“Within the Marvel universe there are thousands of heroes of all shapes and sizes,” he explained. “But The Avengers are here to save the universe and Daredevil is here to save the neighborhood. It’s a very unique look at Hell’s Kitchen in New York, where Matt Murdoch grew up and continues to defend it from people who would harm the people that live there.”

DeKnight added that the tone of the show will feel like a crime story, not a superhero series.

“We really wanted to take our cue from [films like] The French Connection, Dog Day Afternoon, Taxi Driver, and make it very, very grounded, very gritty, very real,” he said. “We always say we would rather lean toward The Wire than what’s considered a classic superhero television show.”

Loeb added, “There aren’t going to be people flying through the sky. There are no magic hammers.”

Loeb quickly clarified that the show does in fact take place in the Marvel Cinematic Universe.

“It’s all connected,” he added. "But that doesn’t necessarily mean that we would look up in the sky and see [Iron Man]. It’s just a different part of New York that we have not yet seen in the Marvel movies.

Daredevil will also feature more graphic content than Marvel’s other tv shows and films to date, according to DeKnight.

“When I came onto this there was no way I wanted to make this hard-R or NC-17,” he said. “I don’t think the material warrants that. It is a little grittier and edgier than Marvel has gone before, but we’re not looking to push it to extreme graphic violence, gratuitous nudity or anything like that. The story does not require that and I think would suffer if you pushed it that far.”

Both Loeb and DeKnight added that Kingpin’s story will be almost as important as Murdoch’s and will be portrayed almost as sympathetic.

While the introduction of Daredevil nemesis, Bullseye is always possible, don’t expect to see him during the first season.

“I wouldn’t say there’s no plans to include the character in the series,” DeKnight explained. “It’s not not to say he wouldn’t be in the series at some point. But I think if you try to jam in too many characters, it just becomes a mess. And [Bullseye’s] story was told in the last iteration of Daredevil that anybody saw. My feeling was, ‘Why repeat it?’ And honestly, if you’re looking for a juicy, multifaceted crime drama, Wilson Fisk was the obvious choice to play the antagonist. Bullseye is a little more cut and dry. Not to say you couldn’t make him fantastic over 13 hours, but Fisk really felt like the right yin to the yang for Matt, and for what we wanted to do this season.”

Daredevil is set to premiere on May 2015 on Netflix.