SPOILER warning: The first seemingly-official image of Marvel's Daredevil in full costume is embedded below.

While no images of Daredevil in his final, red costume have yet been released online, an image has appeared online which was apparently discovered by fans snooping around on the Netflix landing page for Marvel's Daredevil that shows what the superhero will look like once he's all suited up.

The image, which appears to be the thumbnail for the series, can be seen below. It turned up on Reddit and has been making the rounds on Reddit and various Imgur accounts.

Producers and actors had already confirmed that the suit would make an appearance on the show, but have not yet said when or under what conditions Daredevil's costume would change from the simple black bodysuit he's been wearing in promotional photos to this point.

Some fans have noted that the costume bears a resemblance to the D.G.Chichester and Scott McDaniel "armored" costume from the '90s. 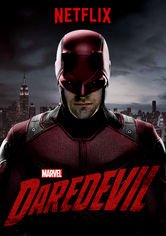 Marvel has not responded to inquiries regarding the image's authenticity.