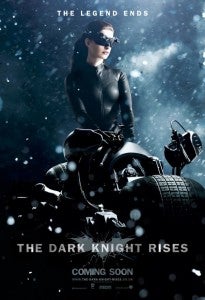 While the first Dark Knight Rises TV spot focused on Bruce Wayne getting back in the game, the second Dark Knight Rises TV spot highlighted Anne Hathaway as Catwoman. The commercial opens with Bruce Wayne dancing with Selina Kyle (Catwoman) at a masquerade ball.  Bruce tells Selina, “That’s a brazen costume for a cat burglar.” Selina replies, “Yeah, who are you pretending to be?”

During the middle of the commercial, there is some brief footage of Bane. Alfred Pennyworth offers up the following assessment on Bane, “Born and raised in Hell on Earth.” Then, it’s back to Catwoman, as she tells Batman, “You don’t owe these people any more. You’ve given everything.”

Of course, the best new scene comes at the end. A valet tells a surprised Bruce Wayne that his wife said he was taking a cab home. Bruce Wayne stammers, “My wife?!?” Flash to Selina Kyle (Catwoman) speeding away in a fast sports car.