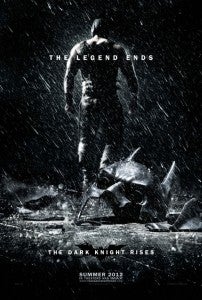 Warner Bros. might have sat out the Super Bowl, but they didn’t sit out the finale of American Idol. The first official Dark Knight Rises TV commercial premiered during the musical showdown between singers Phillip Phillips and Jessica Sanchez.

While some of the footage from the commercial is from previously released trailers, there is also some brand new Dark Knight Rises footage. The new footage is mostly of Bruce Wayne, and it serves to re-iterate that Bruce Wayne has been away for awhile.

The commercial opens with a shot of Batman on a rooftop and with a kid asking Joseph Gordon Levitt’s character John Blake if he thinks he’s coming back. Then, we get Bruce Wayne doing some push-ups. Followed by Bane announcing, “Gotham, this is your liberation.”

After Bane speaks, the stadium and bridges are shown collapsing. A shaggy-haired Bruce Wayne tells Lucius Fox, “I need you to get me back in the game.” There is some eerie footage of Batman in a tunnel being lit up by flashing lights. Then, Lucius Fox asks Bruce Wayne, “Remember where you parked?” Near the end, Alfred Pennyworth tells Bruce Wayne, “Takes a little time to get back in the swing of things.”