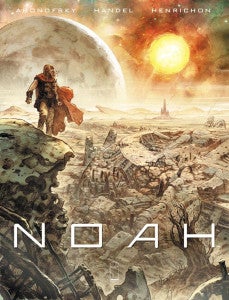 , the Russell Crowe-starring retelling of Noah's Ark from Academy-Award-and-Golden-Globe-nominated director Darren Aronofsky, is coming to comics with collaborators Ari Handel, and Niko Henrichon. Set in a fantastical world, Noah tells the epic story of one man's quest to preserve life for a new world. The graphic novel is based on the first draft of the screenplay for the feature film, Noah. Noah, directed by Aronofsky, and starring Crowe, Jennifer Connelly, Emma Watson, and Anthony Hopkins, hits theaters in March 2014. "It has been a great thrill to see an artist of Niko's caliber interpret the Noah screenplay through his own vision," said Aronofsky. "The results are lavish. This take on the story is from the original screenplay Ari and I wrote, before we began the long process of shaping the story for the big screen. So it is a slightly different take on the material. This book, not merely a movie companion piece, will hopefully give readers a rare insight into the creative process." This is Henrichon's first major work since he teamed up with Brian K. Vaughan to create the critically acclaimed Pride of Baghdad. The graphic novel arrives in stores on March 18, 2014 and will be available for $29.99.

Darren Aranofsky's Noah Gets a Graphic Novel Tie-In In March