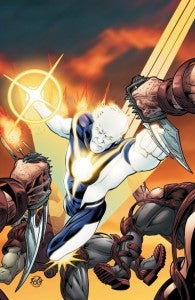 The Ray, an energy-powered hero whose first appearance was for Quality Comics in 1940, is coming to the new DC Universe courtesy of writers Jimmy Palmiotti and Justin Gray, and penciller Jamal Igle.

The Washington Post reported Friday that the trio are working on a four-issue miniseries for DC, which will reinvent the character from scratch starting in December. In spite of Palmiotti and Gray's involvement, the character will be entirely new, rather than using Stan Silver, the version of the character recently created by the pair for their Uncle Sam & the Freedom Fighters series in 2006.

This will mark the third time in less than 20 years that a new Ray has appeared in the pages of DC's comics, with Ray Terrill being introduced in 1992 and the aforementioned Stan Silver in 2006. The new Ray will be Lucien Gates. Based on cryptic comments from DC to the Washington Post, it's clear that Gates's girlfriend disapproves of his secret identity.

Whether the character will have any connection to S.H.A.D.E., as the Stan Silver version did, is unclear at this point. While Father Time still runs S.H.A.D.E. in the new DC Universe (albeit in a radically different form), there has so far been no sign of the Freedom Fighters; Frankenstein and the Creature Commandos appear to be the organization's metahumans of choice these days.

While Palmiotti and Gray have been announced as working for All-Star Western at DC, Igle's future with the company had until now been unclear; his last project was drawing Supergirl, pre-relaunch.

DC Announces Palmiotti, Gray and Igle on The Ray