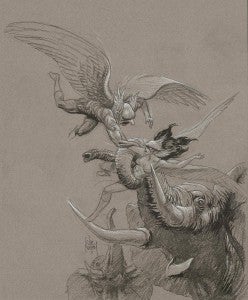 Today at their blog, DC Comics announced a new, six-issue anthology miniseries called Joe Kubert Presents. The legendary writer and artist, currently working with his son Andy on DC's Before Watchmen: Nite Owl miniseries, will have a chance to work with a number of the characters he's most associated with, including some who fans haven't seen in quite some time, according to the announcement. "I've been given the privilege to design the kind of comic book that I would enjoy reading and one in which I'd like to participate," Kubert said. "This is it. I'll be doing Hawkman, Spit, The Redeemer, Sgt. Rock and The Biker in this 6-issue anthology. In addition, the book features the wonderful talents of Sam Glanzman and Brian Buniak. I had a blast doing it. I hope it blows you away." The cover is at left, the first image officially released by DC for the project. Whether there will be more than just the three collaborators over the course of the six-issue series remains to be seen. It certainly sounds like it, though, as DC identifies the series as featuring the work of "Kubert and other great talents," but goes on to say that Buniak will be doing Angel & the Ape and Glanzman will be doing The U.S.S. Stevens. The first issue will be an oversized issue, clocking in at 48 pages and featuring a Hawkman story by Kubert along with backups by the other two.