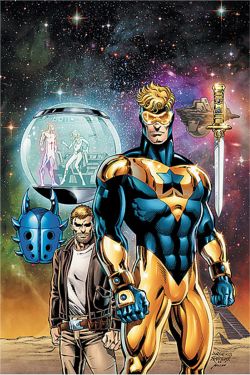 According to reports on Newsarama and Comic Book Resources, DC Comics will raise its cover price from $2.99 to $3.99 per issue on some of its titles. The price change will begin with forthcoming issues of Booster Gold and Teen Titans. In an exclusive interview with Newsarama, DC's executive editor Dan DiDio revealed that the change would begin as early as the June '09 issues of the two series. Recently, Marvel Comics announced that they would be raising cover prices to the $3.99 mark on some of their titles. DC had initially been hesitant to follow suit after Marvel's announcement. "We're holding the $2.99 line as hard as we can, and we will never move a book over to $3.99 unless we feel that there is value added to justify that price change," DiDio told Newsarama. So what was DiDio's justification to the price increase? Add more pages to each book! Both Teens Titans and Booster Gold will add co-features at the end of each issue. The recently canceled Blue Beetle series will continue its story run in Booster Gold. Meanwhile, Teen Titans will add stories about the character known as Ravenger. Comics Worth Reading (via Comic Book Resources) compares this move to when DC raised its cover prices from 35 cents to 50 cents in the mid-seventies. At that time, the number of pages in a standard DC Comic increased from 17 pages to around 25 pages. Unfortunately, this move helped to result in the infamous DC Implosion in which over 60 titles were canceled. Anything from the Blizzard of 1978 to the release of the first Superman movie was blamed for the cancellations. Currently, the nation's economy is in crisis. To survive the economic downturn, many publishers are taking steps to either cut costs or raise revenues while maintaining their fan base. Since more co-features are expected to be added to other DC Comics titles in the near future, fans should not be surprised to see less popular titles get the axe and possible be re-born as co-features.