Last week, we picked up on more than ten DC Comics references and still (according to our readers here and on Facebook) missed some biggies, including the introductions of both Sin and Jean Loring to the cast (we thought both of them had appeared before, hence not mentioning it). What did we catch this week? Not nearly as much, but some cool stuff nonetheless...! (And, yes, we caught the reference to S.T.A.R. Labs and the particle accelerator that we think will be involved in Barry Allen's transformation later this season. But it's not the first time either of those things have been referenced so it didn't make the cut...!) Still ain't Dinah, but we'll take it... Well, we've officially got a Lance sister in the Black Canary outfit. That's a little bit of something, isn't it? In the comics, of course, Dinah Laurel Lance is the Black Canary. In the TV series, we've got a Laurel Dinah Lance who has, up to this point, had no interest at all in suiting up. Now, she's got a sister named Sara Lance who's Black Canary. Of course, this version of Black Canary is a member of the League of Assassins. Oh, yeah. League of Assassins Last week, we got to see a guy dressed like the Dark Archer who showed up and menaced Black Canary, invoking the name of Ra's al Ghul. Technically, that means we knew that the League of Assassins would play a role. This time around, though, we got to hear the words actually spoken onscreen (albeit in the preview for next week's episode). The degree to which the League will be a perpetual thorn in Ollie's side could be interesting to see. Certainly the fact that she asked about Slade suggests there may be some plans to attach him to that side of the show at some point in the not-too-distant future. 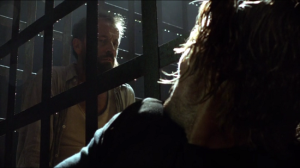 Anatoli Knyazev Is that him for sure? We can't quite tell, but it seems likely, and somebody on IMDb (which is user-edited and can be faulty) sure thinks so. EDIT: Green Arrow TV have confirmed for us that is indeed David Nykl, who plays Knyazev. In any event, it seems likely that Oliver's Russian cell mate on The Amazo is none other than Anatoli Knyazev, better known as the KGBeast. He's the one who gave Ollie the advice that "living is not for the weak." That's particularly interesting, since the glint of recognition that Blood gives him when he says that suggests, at least to me, that Knyazev might have had an impact on the Blood family. Could we see the inhabitants of The Amazo turn out to be important to Brother Blood and his followers? 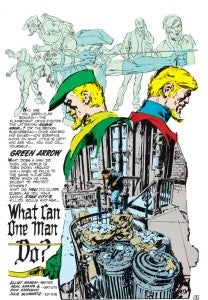 What can one man do? When Oliver talks to Blood and tells him, "One man can change the world," that's a riff on Elliot S! Maggin's classic story "What Can One Man Do?", in which Oliver Queen decides to run for mayor of Star City. Here, of course, it's Starling City. And with the Queen name basically toxic, he's convincing Blood to run instead. Of course, as we later see, it's difficult to imagine the Blood name will be good for all that long...! A miracle? It's a long shot, but is that drug that they've pumped into The Mayor Venom? Given that they just used Bane in a feature film in which he was tied to the Ra's al Ghul/League of Assassins legacy, it seems hard to imagine them doing a similar story again...but then again, he didn't use Venom in the last movie, per se. It could also be Miraclo, which would explain the decision to call it "a miracle." Miraclo is the drug that's used by Hourman, giving someone enhanced abilities for an hour at a time. It's been known to be highly addictive and to cause some serious damage to the body, so it might not be a stretch to picture that drug taking somebody out, especially if it's not yet refined. Whatever the drug is, one has to wonder...could it have to do with Count Vertigo, who was recently confirmed as appearing later in this season? In the TV series, they reinvented the character as a drug dealer and well...if Vertigo himself isn't peddling this stuff, it's hard to imagine he'd take too kindly to somebody else selling weirdo super-drugs in Starling City. Could be an interesting showdown if he and Brother Blood have to go all Heisenberg and Fring on us. 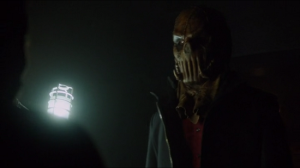 Brother Blood Sebastian Blood is Brother Blood in this version of the series--unless we're to find he's got an identical twin out there with a penchant for similar "save the city" rhetoric. That's probably not news to most comic book fans, but the villain could easily have been Blood's father, in a Merlyn-like swerve to keep fans on their toes. Will it be a family trait, like in the comics? Hard to say; they didn't go that way with Tommy. One thing is certain; it's likely that he's got connections to the League of Assassins, since that seems to be what's dominating the series this year.

5 DC Comics References on Tonight's Episode of Arrow, The Crucible