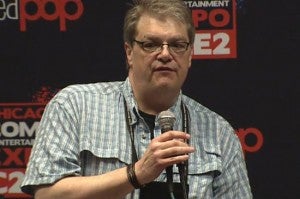 During a panel at C2E2, DC/Warner Bros. VP Marketing John Cunningham was asked about the possibility of either a Justice League or Wonder Woman movie. John Cunningham replied, “Well, we weren’t going to say anything until Warner Bros. studios allowed us to do it, but since you asked the question. Watch this space. Watch it. It’s coming.”

Cunningham added, “I think the best thing I can say to all of you is go out and see Superman opening weekend. Drive that box office. Make people sit up and pay attention to what you want. But I think that the movie business works years and years in planning. These decisions are being made, have been made, and we will all know what they are shortly. And I think we will all be happy when that comes down.”

When asked if there were any plans to use Superman Return’s Brandon Routh in anything Superman related such as animated features, John Cunningham replied, “If we do have those plans I am not aware of them, but let’s hope that after June 14 you won’t want to see anybody but Henry Cavill doing this role.”

As far as marking tie-ins between DC Comics and the Man Of Steel movie, John Cunningham explained, “We’re going to start with free comic book day. There’s also a promotion we’re doing with retailers where they have posters and in-store signage pointing people to specific Superman graphic novels which we think would be great jumping on points. And there’s also another big promotion that’s coming down the pike right before the movie that you’ll hear more details about later, so we’re doing the best we can to put as much stuff out there and build the hype and get people to take what they like in the theater and come back and read our books and see our other products.”

Elf on the Shelf Face Masks Are Becoming a Thing