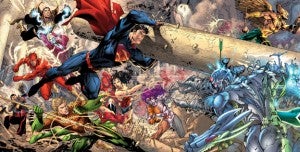 DC Entertainment's Chief Creative Officer Geoff Johns has made it a pretty regular thing, writing the Free Comic Book Day offering and using it as a springboard for the Next Big Storyline. In spite of being a pretty lackluster standalone issue, the Blackest Night offering a few years ago managed to really whet fans' appetite for the already-anticipated blockbuster storyline that came next. This year, we get a look at Trinity War, an upcoming story that will pit the Justice League against the Trinity of Sin and, apparently, themselves. It is, at least in part, the payoff to not one but two long-standing DC Universe mysteries: the story of Pandora, the mysterious woman who appeared in the background of all of the #1 issues of the New 52 and the identity of the Phantom Stranger, whose origin has never been revealed since he was introduced in 1952 but who, according to this issue, appears as though he may be Judas Iscariot. What, if anything, that implication will have to do with Walt Simonson's upcoming Batman original  graphic novel, The Judas Coin, remains to be seen. If the Phantom Stranger is a member of the Trinity of Sin, he's the one who's most adjusted to his "sentence" as doled out by a group of mysterious godlike beings at the Rock of Eternity. The other two are Pandora herself--who is, yes, that Pandora with the box and everything--and an unnamed man who, defiant over being chastised by the gods, finds himself stripped of his identity before he can reveal it to the reader and cast down to Earth faceless as The Question. That course of events, of course, leaves open the already-puzzling question of what happened to the last known Question, Renee Montoya, in the world of the New 52 where her only appearance was as a photo on the Gotham City Police Department's wall of honor. 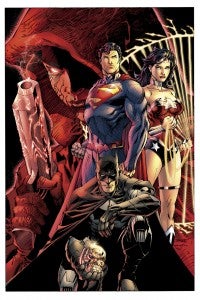 With those reveals out of the way, the rest of the story focuses on Pandora's attempts to recover the contents of her box--before flashing forward to a scene where the Justice League is squabbling over those same contents (some kind of golden skull), which Batman possesses while he dukes it out with a mysterious new Green Lantern in a cowl. The identity of that character is also unclear, save for the fact that it seems unlikely to be John Stewart. Even though he's a human, and an African-American, he's called "new guy" and derided by Batman for being "no Hal Jordan," a jab that's unlikely to be directed at Stewart who may not be as "great" as Hal but who has long since stepped out of Jordan's shadow. Perhaps the issue's greatest achievement is that Ivan Reis, Gene Ha and Kenneth Rocafort manage to maintain a consistent look and feel throughout, which is an important task when their story is, all told, only 12 pages. There's also a four-page gatefold by Jim Lee, which has been seen around the Internet quite a bit since it was leaked a couple of weeks ago, but it's got only a single line of dialog on it and the tease that the Justice League will be fighting with one another. Its weakness lies in something that writer Johns likes to do a lot: the quantity of everything is increased without any reason that's apparent yet. He introduces yet another human Green Lantern in spite of the fact that there are already four of them active, and DC has a hard enough time giving each one a spotlight bright enough for  the characters' fans. Instead of the Old Wizard who grants Shazam his powers residing at the Rock of Eternity, it's a council of seven wizards, only one of whom ever talks. Earth 2 makes an appearance to remind us that we have more Supermen, Batmen, Wonder Women, Green Lanterns and Flashes than anybody knows what to do with. We also get what appears to be reinventions of characters absolutely nobody is asking for, with Vibe appearing on the gatefold teaser and one member of the council of wizards appearing to be a new Super-Chief. If part of the idea of DC's New 52 reboot was to simplify the publisher's stories (which has been the argument used to justify removing the Justice Society from Earth 1's history and deleting characters like Ted Kord and Wally West from the stories entirely), it seems to be failing miserably as Johns can't help piling more and more baggage onto the characters' mythology.  Often, this works well under his stewardship--he knows what his goals were in setting up the elaborate new backstory, after all, and has the editorial pull to follow through with his goals--but falls apart when other writers get their hands on the characters DC has traditionally had a difficult time making hay with their magical characters, and Trinity War appears to be putting all of their eggs in the "Geoff Johns can fix what's broken" basket. From Green Lantern to Flash to Aquaman, he's managed to rehab ailing characters and restore them to best-seller status but this one may be too much even for him. Time will tell whether fans will embrace this story or whether it will--like Day of Judgment, the last linewide crossover Johns wrote based around magic and featuring non-Hal Jordan Green Lanterns--be met with indifference. Underwhelming Free Comic Book Day teasers for Flashpoint and Blackest Night eventually turned into best-selling series, but even in spite of that it seems to miss the point of Free Comic Book Day. Will this issue bring in new readers? Almost certainly not. It's got "continuity porn" written all over it and will be nigh-incomprehensible to anyone who doesn't already have a vested interest in the New 52, or at least the characters. Preaching to the converted is a major problem in the comics industry and this plodding, impenetrable story only contributes to it.