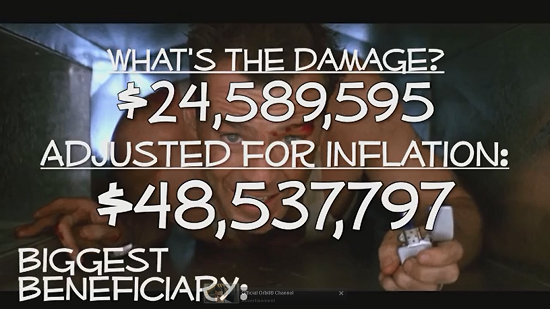 In the first installment of their new series What's the Damage, the Cinema Sins crowd have decided to take on the economic cost of the damage done in action movies.

It's not unheard-of; experts have done this for every major superhero movie in the last couple of years, especially those (like The Avengers or Man of Steel) that see big parts of the city destroyed. This one will be an ongoing series, though, and take aim at fan-favorite movies from through the years (adjusting for inflation), rather than just the newest of the new.

They started with Die Hard, which of course is the last movie Cinema Sins took aim at. It's also a Christmas movie, so you can adjust for inflation and pretend in your head that the movie just happened last night and we're now looking at a Los Angeles evening news report counting up the price tag of the Nakatomi terror attack.

Because nothing says "holiday spirit" like explosions and math.

Check out the video below, in which they estimate that the damage would be roughly $48 million in today's dollars, and chime in on the comments on YouTube if you've got a movie you want them to take on.

Did you ever watch a movie and think, "Boy, there is an awful lot of damage being done in this film. I wonder how much there is in total?" Well, we did. So we did some Internet research, and went looking for some kind of financial representation of all the damage done in the movie Die Hard. It was a lot.

Which movie's damage deserves to be tallied up next?

Die Hard Would Have Done About $50 Million in Damage