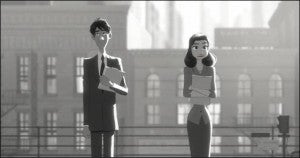 Once defined by a string of poorly-received sequels, Walt Disney Animation has been struggling to catch up to its younger sibling at Pixar for years. They may be coming closer than ever with Paperman, an animated short that’s built up giant buzz and a handful of awards on the convention circuit.

As a result, Disney is giving it a full-fledged theatrical release as a short film ahead of their anticipated, upcoming feature Wreck It Ralph.

The studio has released its first round of publicity stills for the film, which is directed by John Kahrs and animated using a process that blends computer- and hand-drawn animation to give the film a unique look and feel. On top of that, Kahrs made the whole thing in black and white, which gives it a decidedly “period film” flavor...all with a decidedly Disney flair, particularly where it comes to character design. I mean--just look at that girl and tell me she doesn't look like exactly what you expect the female love interest in a Disney movie to look like. 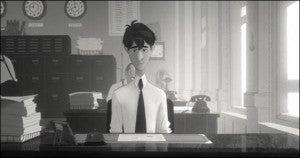 The movie apparently revolves around a lovable loser who tries to attract the attention of his dream girl using nothing but a stack of paper.

Since John Lasseter, the co-founder of Pixar, has been calling the shots at Walt Disney Animation, things seem to be looking better and better. Even as Pixar had its first real stumble with Cars 2, Disney proper impressed most fans with The Princess and the Frog and Tangled and looks to make about as much money with Wreck It Ralph as they did on the Pixar-animated Brave. 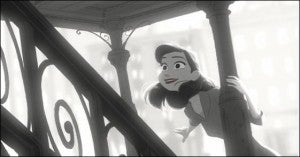 Paperman will debut in American theaters on November 2.