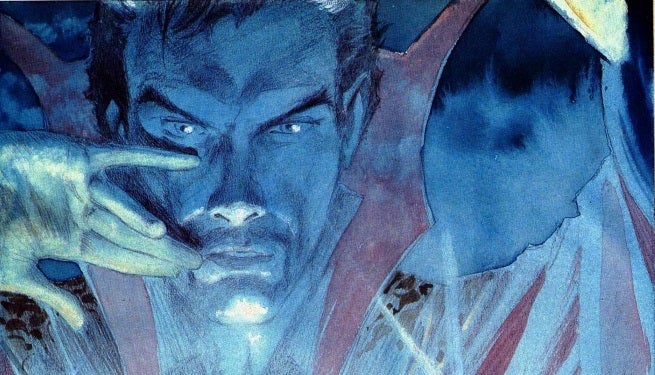 From the creative team of J.M. DeMatteis and Dan Green, Into Shamballa was one of the stories published under Marvel Comics’ graphic novels imprint in 1986. The story sees Doctor Strange revisiting the home of his mentor, the Ancient One, only to be summoned by the Lords of Shamballa. These seemingly benevolent beings send Strange on a mission that will help usher humanity into a spiritual Golden Age, but to do so requires the death of most of the Earth’s population. Doctor Strange is left to contemplate whether the fulfilment of the few is worth sacrificing the many.

Here’s the image posted by Derrickson.

This isn’t the first image Derrickson has posted that is relevant to Doctor Strange. We reported previously on a panel he had posted from Infinity Gauntlet, and speculated about whether he may be looking for story cues to tie the Sorcerer Supreme to the cosmic events that are coming down the line from Marvel Studios, or if he was simply taking visual cues from a masterful artist, George Perez.

The same questions apply here. The page of Green’s artwork that Derrickson posted is steeped in visual ambience, so it’s possible he’s looking to draw visual inspiration. On the other hand, Into Shamballa is a story that’s fairly popular with Doctor Strange fans, so Derrickson could do worse than borrow its plot.

Between the Infinity Gauntlet and Into Shamballa tweets, Derrickson also shared a couple of images of Doctor Strange’s mystical hand gestures, perhaps comparing the two for use in the film. He also shared some quotes from Strange (he frequently shares quotes from various sources across media, from Doctor Strange, to Chris Ware, to Werner Herzog), all of which we’ve included below.

"Ahh, like most dabblers you understand too quickly." - Doctor Strange

"Faith is my Sword. Truth my Shield. Knowledge my Armor." - Doctor Strange