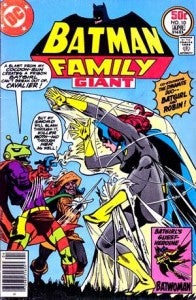 It's been awhile, but it's time once again for another Dollar Bin Discovery, the recurring feature that sees me scoop up fresh catches from my local comic book store's dollar bin and then see if what's in the net is pure fresh catch of the day goodness or a rubber boot. Sometimes you can find a real catch hiding in the boot.  For example,  this edition sees us return to the days of the short-lived DC series The Batman Family.  Back in the late 1970s, this was a key book that showcased characters such as Batgirl, Robin, Man-Bat and Black Lightening, characters that didn't always soar in their own ongoing series for awhile.  Most of these books are priced at well over five or ten dollars in most industry price guides, but this particular issue, Batman Family #10, was missing its cover.  This issue may not seem all that noteworthy, but it shows us the first meeting between Batgirl and Batwoman.  In the new DC 52, Batgirl and Batwoman are about to cross paths for the first time inthis week's Batgirl #12.  This issue was interesting to note for that reason, and the way that Barbara Gordon as Batgirl differed in so many ways from the Kathy Kane of then and the Kate Kane of now.  Let's examine how this issue, showcasing the widely ignored Silver Age Batwoman, stacks up in contrast to her modern day sister.

Summary:  The title for this tale is "Those Were the Bad Old Days", and if they're referring to the caliber of villain faced by Batgirl and Batwoman in this issue they would be right.  We start with the first part of a frame story, with Batgirl and Batwoman fighting "formidable" adversaries in Killer Moth and Cavalier.  After that battle, we flash to Barbara Gordon, that Rep. Barbara Gordon, sitting in her office reading mail for Batgirl (?) and comes across one person's suggestion that she now go by Batwoman, which leads her to wonder whatever happened to the former crimefighter.  Not long after, Batgirl handily defeats Cavalier from robbing a woman, that pesky "I don't hit ladies" thing makes it a lot easier for Babs to take him out.  She then runs into Kathy Kane, the former Batwoman, and as the two are walking and visiting, she notices a giant moth chewing on the jail in attempt to free Cavalier.  Enter Killer Moth, of course, who is promptly met with a sock in the face from Batgirl.  One thing that always amazed me about a lot of these 70's issues is how quickly the heroes could get in and out of their costumes and then reappear on the scene in their civilian roles without anyone caring or questioning.

But I digress.  Batgirl takes to bringing down the moth, only to have Batwoman appear on the scene to help after Babs becomes enmeshed in Moth's "goo gun."  In one of the more bizarre sequences I've read in comics, the Cavalier, a 50ft Cavalier, rescues Killer Moth and escapes.  We learn that both the giant moth, which Batgirl rode, and the Cavalier were illusions.  How these illusions were able to attack buildings, be ridden and in the case of Cavalier pick up two grown women and place them on a roof is beyond me.  Anywho, Cavalier and Killer Moth decide to take the U.S.S. Constitution, which Babs and Kate just happen to be on.  As the ditzy duo of villains heads towards the ship on real/imagined moths, the two heroines each make up excuses to run off and end up running into each other at the other end of the boat in their respective costumed identities.

It wasn't hard to figure out the secret.

Batgirl and Batwoman go for one more round with the fiends, and Cavalier breaks his no-hitting rule to try his fist on Batgirl, but much to his chagrin he is quickly taken out.  Batwoman handles Killer Moth with relative ease, and so ends the villainous duo's partnership, at least until Batman Family #15.  Barbara and Kathy finish the story talking on a ferris wheel, with Kathy stating that she has no intention of taking up the Batwoman mantle again and that Barbara is welcome to it.  In an interesting phrase, Barbara responds that, "there always has been and always will be only one Batwoman, and retired or not it's you."

Issue Worth?  It's sad that the issue ends here, as Batwoman's next big appearance would be her death at the hands of Bronze Tiger several years later in the pages of Detective Comics.  Batwoman was originally invented, along with the first Bat-Girl, to protect the heterosexuality of Batman and Robin during the Seduction of the Innocent days.  It is a shame that she never developed into as capable and independent a hero or detective as Batgirl/Barbara Gordon did, but she has a legacy in comics just the same.  It will be interesting to see how the latest matchup between Barbara and the new Batwoman, Kate Kane, will be in tomorrow's issue of Batgirl.  Still, this issue provides a mostly entertaining tale of one heroine who is as popular as ever and another who has faded into the backdrop of comics.  Final Worth:  .75