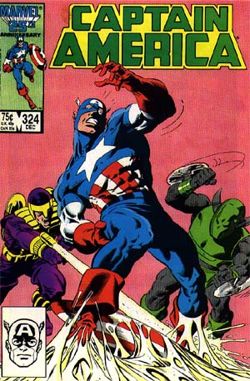 Anyone who groaned their way through the egregiously bad Batman and Robin remembers the horribly ‘punny’ dialogue of Mr. Freeze, played with a range of emotions from A to B by Arnold Schwarzenegger. While this was unique to the overall movie franchise, comics themselves have been home to some especially unfunny plays on words over the years, especially from ‘gimmick’ villains.

And that brings us to today’s Dollar Bin Discovery. Whirlwind and his new friend Trapster, formerly the gloriously named Paste-Pot Pete, have always existed on the lower rungs of B-list villains in the Marvel Universe, and if this issue of Captain America is any indicator, well, that may be a good thing. Whirlwind with his ability to spin fast like a top and Trapster with his various and strange traps and glues, have usually found themselves aligned with other groups of villains. Here they are on their own. How do they fare? Let’s find out!

Summary: The story has an interesting start. Cap surprises a group of teens horsing around with water guns (what?) in a warehouse, where he is responding to a distress call. The teens are immediately afraid, assuming that Captain America will shoot them (double what?). Their fears turn out to be somewhat legitimate, as we soon learn that Cap was forced to shoot a man who had opened fire on a crowd in a previous issue, Cap’s shield no where nearby in order to stop the man. As Captain America puts it, “ Every second I hesitated meant the death of another innocent.” A noble reason, perhaps, indeed.

Skipping ahead a couple of frames, here comes poor, can’t get any respect villain Whirlwind. He enters the Tinkerer’s lair, who apparently runs a shop for bad guys, as he requests the Tinkerer’s help in getting, get ready for it, respect. The Tinkerer quickly sets him up with a pair of wrist buzzsaws, to help add to Whirlwind’s former method of fighting which was, in his words, to spin around really fast and punch people. Triple what?

Soon after, Trapster enters, and he and hard luck Whirlwind form a partnership to “show ‘em all” what they’re capable of. They devise a plan to set up Captain America, who is seen sitting in his van, pondering his recent PR backlash over his taking of a life of a terrorist. They lure him out in the open with a call to Cap’s hotline (what?) where Whirlwind appears in the form of “several small twisters”, according to the yokels, I mean locals, who inhabit the nearby diner.

Cap appears on the scene, and Whirlwind promises to “cut him down to size” in typical gimmick villain fashion. After luring Cap away on a chase, Trapster steps in, covering the road in his newly invented “lubricant Z”. No jokes please, folks. They write themselves sometimes.

After “tsk tsk”ing Cap for his foolishly falling into their trap, Whirlwind makes the requisite, “cut you to ribbons” comment, while Trapster sets to make sure Captain America is securely stuck. Using his belt as a weapon, Cap trips up a fast-approaching Whirlwind, flipping him down into the glue while jumping out of his boots to escape and take out Trapster. So much for Whirlwind’s plans to escape third-ratedom.

Issue Worth?: A sub-plot with Nomad props up this issue a little, as he looks to infiltrate The Slug’s drug ring, and Cap’s dilemma over his actions with the terrorist poses some interesting questions, but Whirlwind and Trapster’s odd appearance and complete lack of effect, coupled with more than corny dialogue, make this a pretty unnecessary issue for the star-spangled avenger. Worth: .25