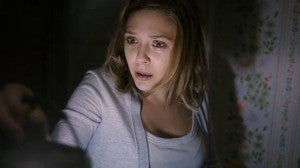 Even though there's been no formal announcement from Marvel Studios, Samuel L. Jackson has apparently confirmed that Elizabeth Olsen will be playing the Scarlet Witch in Avengers: Age Of Ultron. It had been previously reported that Elizabeth Olsen was close to signing on for the role, and Olsen herself had expressed a desire to work with Robert Downey, Jr., who of course plays Iron Man in the Avengers franchise. Still, neither Disney nor Marvel Studios has put out a press release announcing her casting, as they have done with several other actors recently.

However, when the Wall Street Journal Speakeasy spoke with Samuel L. Jackson about his recent cameo on Agents Of S.H.I.E.L.D., he confirmed the casting to them. "I don’t think we begin shooting before March of next year,” Jackson said.  ”I know we’re shooting in London, that James Spader is Ultron and going to be the bad guy, and that we added Ms. [Elizabeth] Olsen [who will play the Scarlet Witch], but I don’t know what she’s doing, if she’s on the inside or the outside. I haven’t seen a script.”

Even though Samuel L Jackson appears to be specifically saying that he doesn't know what role Elizabeth Olsen is playing, the Wall Street Journal seems to have added that she will play the Scarlet Witch, which of course is her rumored role. Avengers: Age Of Ultron is scheduled to be released in movie theaters on May 1, 2015.