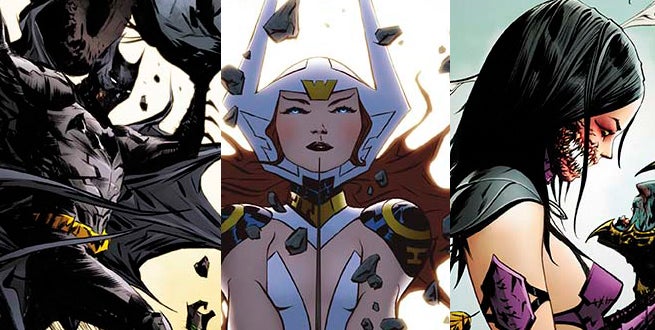 Did you all know that Jae Lee draws pretty, pretty pictures?

Well, you're about in DC Comics' August 2015 solicitations.

Thanks to DC Comics, we have your exclusive look at the next chapters of the popular digital-first comics Injustice: Gods Among Us and Mortal Kombat X, along with a new Justice League: Gods and Monsters prequel comics, which will further flesh out Bruce Timm's twisted animated universe where the DC Universe's icons take the idea of heroism a bit more--liberally.

These images will be available digitally before August, but you'll have to wait until Agusut to nab them in print. Check out the solicitations for the issues that hit print that month, including Batman vs Robin, the origin of the New God Bekka, the Wonder Woman of a new world, and a smile on Mileena's face that the Joker would be proud of. Then scroll through the gallery below for the covers from Jae Lee, Neil Googe, and Darick Robertson, because pictures, words, etc.

INJUSTICE: GODS AMONG US: YEAR FOUR #7
Written by BRIAN BUCCELLATO
Art by BRUNO REDONDO and JUAN ALBARRAN
Cover by JAE LEE
On sale AUGUST 5 • 32 pg, FC, $2.99 US • RATED T • DIGITAL FIRST
It's a family feud years in the making, and raised to a devastating level, as a superpowered Batman and Robin engage in an earth-shaking battle. Meanwhile, Wonder Woman takes on Hercules, Shazam battles everyone, and even Zeus enters the fray!

INJUSTICE: GODS AMONG US: YEAR FOUR #8
Written by BRIAN BUCCELLATO
Art by MIKE S. MILLER
Cover by NEIL GOOGE
On sale AUGUST 19 • 32 pg, FC, $2.99 US • RATED T • DIGITAL FIRST
The tables have been turned, and now Superman himself has been driven underground…way underground. Ares directs the Man of Steel to Hades, where he assures Superman some assistance will be found. Back on the surface world, Wonder Woman confronts Batman, and up on Olympus, Harley tries bonding with Queen Hippolyta—we'll see how well that goes.

JUSTICE LEAGUE: GODS AND MONSTERS – WONDER WOMAN #1
Written by J.M. DeMATTEIS and BRUCE TIMM
Art by RICK LEONARDI and DAN GREEN
Cover by JAE LEE
1:10 Variant cover by DARWYN COOKE
On sale AUGUST 5 • 40 pg, FC, $3.99 US • RATED T • DIGITAL FIRST
Retailers: This issue will ship with two covers. Please see the order form for more information.
Prequel to the DC Universe movie Justice League: Gods & Monsters!
Earth in the 1960s—where a woman-warrior from a faraway world finds herself among a group of young idealists, seeking peace and love in a time of turbulence and upheaval. But Bekka of the New Gods finds her Aquarian dream abruptly shattered when she encounters the monstrous genius of Doctor Psycho and the Shock Exchange!

JUSTICE LEAGUE: GODS AND MONSTERS #1
Written by J.M. DeMATTEIS and BRUCE TIMM
Art by THONY SILAS
Cover by DARICK ROBERTSON
1:10 Variant cover by DARWYN COOKE
On sale AUGUST 12 • 40 pg, FC, 1 of 3, $3.99 US • RATED T • DIGITAL FIRST
Retailers: This issue will ship with two covers. Please see the order form for more information.
Prequel to the DC Universe movie Justice League: Gods & Monsters! Superman, Batman, and Wonder Woman: three powerful and dangerous loners, drawn together by a man who claims he can bring humanity to the next level of evolution. But are Jackson Alpert and his immortal Forever People what they claim to be? Will they save the Earth—or conquer it?

MORTAL KOMBAT X #9
Written by SHAWN KITTELSEN
Art by DEXTER SOY
Cover by JAE LEE
On sale AUGUST 12 • 32 pg, FC, $3.99 US
MATURE READERS
Chaos erupts on the shores of Shang Tsung's Island! What happens when Johnny and Sonya are forced to fight their own daughter, who's been possessed by the Kamidogu? And what happens when Mileena and Kotal Kahn finally meet face-to-face?