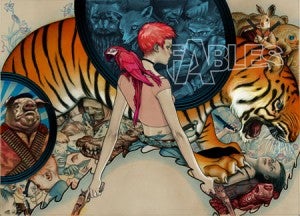 Bill Willingham, whose fan-favorite series Fables will be the longest-running Vertigo title once DC cancels Hellblazer in a couple of months, told his Twitter followers today that he'll have a "big announcement" shortly after noon tomorrow.

"Look for an interesting announcement at 12 noon, on 12/12/12," tweeted the veteran creator earlier today. Shortly after the initial tweet, he followed up with, "Under advice we've decided to delay the big announcement until 12:12 and 12 seconds (CST), on 12/12/12. Auspicious, neh?"

Barring something out of the blue, there seems to be two biggest possibilities: something Fables-related, perhaps movement on film/TV rights or even a switch out of the seemingly-doomed Vertigo imprint, or an announcement related to a new project.

It was intimated at San Diego Comic Con International that Willingham was planning to work with Monkeybrain Comics, run by his friend and former Fables collaborator Chris Roberson. Roberson's last work for DC/Vertigo was planned to be an arc on the Fables spinoff Fairest, but he was cut loose from those obligations after voicing his discontent with DC management and their Before Watchmen plans earlier this year. In July, as Before Watchmen was beginning, Roberson and his wife Alison Baker started a comics imprint within the publishing house they already owned.

Since Karen Berger stepped down, fans have wondered what might happen with Vertigo, which does well in the bookstore market but which seems to be kept alive in the serial, comic book store market only by Fables and Hellblazer at this point. It's likely not going anywhere as long as they have the Stieg Larsson series to deal with, but there's always the outside chance they could be moving away from monthly comics and that Willingham could be the one to tell everybody DC has designs on Fables's next step.

But that's all speculation based on very little evidence. Come back tomorrow and we'll know more.