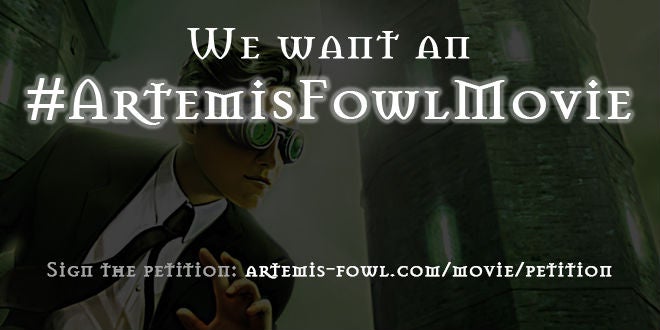 Fans of Eoin Colfer's best-selling Artemis Fowl series of children's books are petitioning Walt Disney Studios to launch a film franchise based on the novels.

The petition, currently sitting at just over 3,000 signatures, hopes to generate at least 10,000 to show Disney that there is interest in the franchise, which the studio snapped up years ago but has languished in development hell ever since.

In the intervening time, of course, Disney has acquired Marvel Studios, Lucasfilm and their library of fairly family-friendly blockbuster fodder, making the prospect of an Artemis Fowl movie feel less like a fait accompli.

You can see the full message from the artemis-fowl.com website below:

We don’t know about you, but we are oh-so very excited about the prospect of an Artemis Fowl Movie.

Many of us have been waiting 14 years(!) since the very first book graced bookshelves across the world. However, due to rights disputes, delays, scripts, and all manner of other ‘Development Hell’ issues, the movie has been delayed and delayed and delayed.

Well… we have decided to try something. An Artemis Fowl Movie petition!

New Marvel Video Game Could Be Revealed This Month