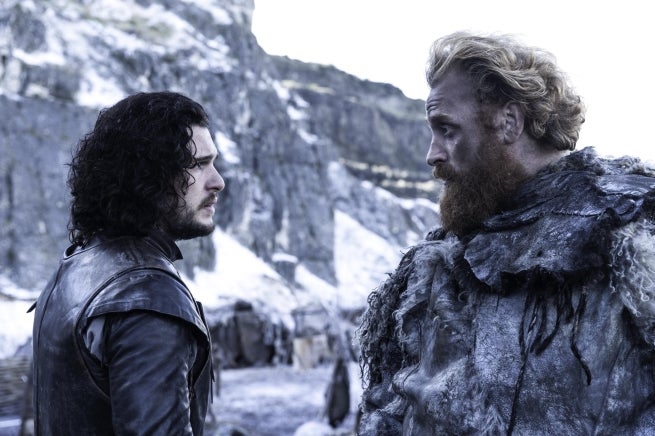 Jorah and Tyrion stand before Dany in her throne room. She asks why she shouldn’t kill Tyrion, if that’s who he really is. Tyrion points out that he’s the greatest Lannister killer of all. Tyrion recount Dany’s story, and the faith Varys put into her, but he goes on to say that he has necessary insight that she’ll need if she’s to rule Westeros. As a test, she asks Tyrion what she should do with Ser Jorah. Tyrion speaks for Jorah’s devotion to Dany’s cause, but then notes that he did betray her. He notes that a ruler who kills those devoted to her does not inspire devotion, but that she cannot march on Westeros with Jorah at her side. Dany has Jorah removed from the city.

A septa brings Cersei food and water and water in her cell. She tells Cersei to confess, and strikes her with a spoon when she says anything else. She leaves her the darkness of her cell.

Arya prepares her new identity with Jaqen, and a sales girl selling fish. Jaqen gives her a task, to go to the dock and see something. Arya goes to the dock as her new identity, Lana. She serves a thin man oysters and overhears a man involved in a bet that’s gone bad. She discusses the situation with Jaqen. Jaqen tells her to observe the thin man, and then give him a gift.

Qyburn visits Cersei in her cell. He gives her the details of her upcoming trial. Shes asks if there’s been any word from Jaime, but Qyburn says there hasn’t. Qyburn tells Cersei that Pycelle has summoned Keven Lannister back to King’s Landing to serve as Hand of the King. Kevan has refused to visit Cersei. Tommen is in a state of depression and won’t see anyone. Qyburn tells her there’s a way out, but Cersei refuses to confess to the High Sparrow that she rose up in the first place. Before leaving, he tells her “the work continues.”

Reek brings food to Sansa, who just stares at him as he enters. She asks Reek why he told Ramsay. Reek says he was helping Sansa, that there is not escape from Ramsay. Reek recounts the torture Ramsay did to him. Sansa says that she’d do the same to him, and that because of him she doesn’t have a family. Reek says he deserved it for turning on Robb and capturing Winterfell, and killing “those boys.” Sansa says they weren’t “those boys,” they were Bran and Rickon. Reek lets slip that they weren’t Bran and Rickon.

In Roose Bolton’s war room, he and his advisers discuss their position against Stannis. Roose says they are far better prepared for a siege than Stannis is. Ramsay counsels taking the fight to Stannis instead, to send a message to the other Northern families. Ramsay asks for just twenty good men.

Tyrion and Dany speak privately, and they discuss what to do with each and about each other’s fathers. Tyrion tells Dany that opening the fighting pits was wise, and that marrying Hizdahr, despite loathing him, is impressive. Tyrion tells Dany that Varys is the one that sent Tyrion to her. Dany is wary of Varys, but Tyrion tells her that Varys is probably the only reason she’s alive. Dany says she’s not going to kill Tyrion, or banish him. She’s going to make him an adviser. Tyrion starts by suggesting that she leave Westeros to itself, suggesting that she can do better elsewhere, but Dany is determined to return home.

Jorah returns to his former owner and offers to fight in the great pit at Meereen.

The septa is again feeding Cersei and telling her to confess. Cersei is again trying bribery, and then threats, but to no avail.

At the Wall, Gilly tends to Sam’s wounds. They both admit that they’re a little scared. Ollie comes to the room with food. Gilly leaves to check on the baby. Ollie asks Sam why Jon would try to save the Wildlings. Sam tells Ollie that he’s seen the White Walkers that are coming, and Jon is only taking a necessary risk.

Jon rides on a ship with Tormund and other men as they arrive at Hardhome. As they arrive, Tormund is greeted by Rattleshirt. Rattleshirt calls Tormund a traitor and accuses him of fighting for the Crows. Rattleshirt mocks Tormund, but Tomund takes the club from Rattleshirt’s hand and uses it to beat him to death.

Once inside, Jon makes his pitch to the Wildlings. Jon gives the Wildlings his dragon glass as a gift. He offer them the Gift to settle on if they come with him and fight against the White Walkers. A Thenn asks about Mance Rayder. Jon says he killed Mance. The Wildlings are ready to kill Jon, but Tormund speaks for him, calling Jon’s arrow a mercy. With Tormund vouching for Jon, many Wildlings agree to join forces with the Night’s Watch, but the Thenns still refuse and call Jon an enemy.

The Wildlings load up on Jon’s ships to leave for the Wall. Jon is still wary of leaving so many behind, but Tormund reminds him that their running out of food. With nothing around to hunt, he assures Jon that the others will come around.

Edd gathers up the dragon glass, but leave one dagger in the hands of a giant. The dogs outside start barking. They Wildlings look towards the mountains, where clouds of snow are rising. They retreat behind Hardhome’s walls, as many as they can, and shut the gates. There’s panic outside the gates, and then silence. A then peers through an opening in the gate. He sees a wight charges towards them. The wights being tearing down the gates as the wildlings dash for the boats in a panic. The wights climb onto the roof of the meeting all and leap inside. The Night’s Watch forms up and charges towards the gates. The wights break through the walls and start killing wildlings. Jon, Tormund, and the Then see White Walkers on horses overlooking the battle from the mountains. Jon starts moving towards the hall to find the dragon glass. A giant bursts forth from the hall, stomping on wights as he goes. A white walkers strides into the burning hall. The Thenn moves to fight him while Jon finds the glass. The Walkers weaon shatters the Thenn’s axe, and the white Walker kills him. The Walker moves to attack Jon. Jon picks up a sword from the ground, but the White Walker shatters it and knocks Jon down. Jon picks up Longclaw, made of Valyrian steel, and it withstands the White Walker’s attack. Jon uses it to kill the Walker. The Night’s King sees this happen. After a moments respite, the Night’s Kign sends a legion of Wights tumbling over the mountain to continue the attack. The wights knock down the walls. Jon and the rest flee to the boats. Jon and the rest take to the water in the boats. The Night’s King walks down the dock and locks eyes with Jon. The Night’s King raises his arms, and the Wildling dead awake as new wights.