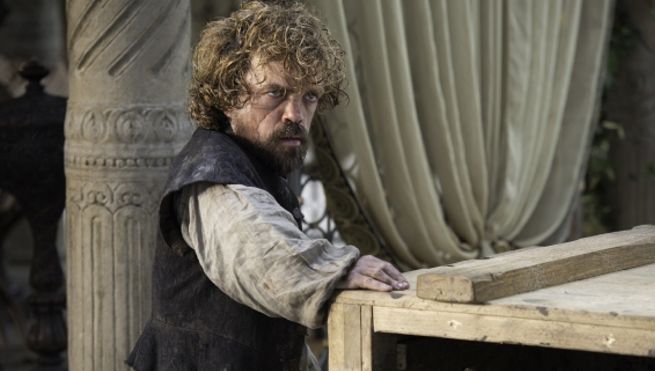 The episode’s opening shows us King’s Landing, the Eyrie, Winterfell, the Wall, Pentos, and Meereen.

Two girls, one blonde and one brunette, track through the mud in a forest. The brunette is worried about the other girl’s father finding out, but the blonde looks at her and tells her she doesn’t need to worry about her father. They come to a cabin. The brunette is hesitant to go in, but the blonde is determined. They enter and find a woman sleeping. The brunette bumps into a caged rat and the woman wakes up. The blonde says the woman was supposed to be terrifying, but is instead just boring. The woman is supposed to be a witch who can tell the future, living on the blonde’s father’s land. She demands the witch tell her future or she’ll have the witch’s eyes gauged out. The witch hands the blonde a knife and tells her to give her a taste of blood. The blonde slices her thumb and witch licks the blood from the wound. The witch tells her she gets three questions. The blonde says she’s been promised to the prince and wants to know when she’ll marry. The witch says she’ll never marry the prince, but will marry the king instead. The blonde asks if she’ll be queen, and the witch says she will be queen for a time, until another, younger, more beautiful queen comes to cast her down. The blonde asks if she and the king will have children. The witch says no, the king will have 20 children and the blonde will have three. The blonde says that doesn’t make any sense, and the witch says gold will be their crowns and their shrouds and then laughs. The brunette tells Cersei they have to go.

In present time, Cersei rides in her palanquin, dressed in black, to her father’s funeral. Margaery smiles at Cersei as she climbs the steps. Cersei tells the High Septon that the mourners will wait while she has a moment alone with her father, regardless of how far they have travelled.

Cersei finds Jaime inside the sept with Tywin’s body. They discuss their father’s wants and desires. Jaime says Tywin built everything for them and that the people outside will immediately try to tear it down. Cersei blames Tyrion for everything and Jaime for not listening to her warnings about Tyrion in the first place. She says Tyrion at least killed Tywin on purpose, but Jaime did it by accident, by freeing Tyrion and by stupidity. Cersei says Tywin loved Jaime more than anyone in this world. She kisses Tywin’s forehead and walks out of the sept.

Tyrion watches the world outside through a hole in his crate, as he travels by ship and is carried through a city. The crate is finally opened and Tyrion falls out to find Varys standing over him. They are at Ilyrio’s home in Pentos, a place where Varys and others who saw King Robert as a disaster first gathered to support a Targaryen restoration. Varys tries to talk of the future, but Tyrion is only interested in drinking.

In Meereen, the great harpy is pulled down from the top of the great pyramid. One of the Unsullied passes several whores on the street until he finds a particular one. He pays her and enters her home. She asks if he wants the same as always. She half-undresses and holds him on her bed, stroking his head and humming a song. As his eyes are closed, a man in a mask silently slits his throat.

At the wall, Jon Snow trains a young Night’s Watch recruit while Sam talks with Gilly. Thorne walks through the yard, saying the men need a strong hand. Sam and Gilly are worried that Thorne will be made Lorde Commander and send Gilly and her baby away. Melisandre finds Jon in the yard and says the king wants a word.

Jon and Melisandre travel to the top of the Wall. Jon asks if she’s cold, and Melisandre says the Lord’s fire lives within her. She asks if Jon is a virgin, and he says no. She says that’s good.

Jon kneels before Stannis. Roose Bolton now rules at Winterfell, and Stannis asks if Jon wants revenge for what happened to the Starks. Jon says he wants many things, but is a brother of the Night’s Watch now. Davos notes that some of the Night’s Watch men love him, but others don’t trust him because of his relationship with the Wildlings. Stannis says he will take back the North and mount Bolton’s head on a spike, but that he needs more men. Stannis wants the Wildlings. He offers pardons, citizenship, and land if Mance Rayder kneels and swears loyalty before Stannis. Stannis tells Jon to convince Mance to kneel by nightfall, or Mance will burn.

Littlefinger and Sansa watch Robyn train at sword fighting. Robyn is pretty bad at it. Petyr receives a message and reads it before putting it in his sleeve. Petyr and Sansa leave for a journey.

Brienne and Podrick are camping in a field by a stream. Pod asks if they’re heading north. Brienne says she’s not a knight and Pod isn’t a squire. Pod reminds her that she swore to find the Stark girls. Brienne says Arya didn’t want her help, and Pod says Sansa might.

Petyr and Sansa’s caravan travel past. Sansa notes that Petyr told Lord Royce they were heading toward the Fingers, but they’re now heading west instead. Petyr says they are heading to a land so far from here that even Cersei can’t touch them.

Loras Tyrell is eulogizing Tywin to Cersei, but she is distracted watching Mace Tyrell as well as Tommen and Margaery flirting. She walks towards them, but runs into Lancel, who has had his hair cut and is dressed in plain cloth clothing. Kevan Lannister explains that his son has joined a group of religious fanatics called the Sparrows.

Lancel finds Cersei alone. Lancel asks for forgiveness for tempting her into their unnatural relations, as well as for the king’s boar hunt and wine. He says he’s a different person now, having found peace in the light of the Seven. He invites her to find the same, saying their world is at hand and that he’ll pray for Tywin’s soul. She laughs at that.

Loras and his lover are inspecting a curious birthmark on Loras’ leg. They speak of leaving the capital for anywhere else. Margaery walks in on them and says they’re late for dinner. She asks the other man’s name and he says Oliver. Oliver leaves. Margaery suggests a bit more discretion, but Loras doesn’t see a point when everyone already knows. They discuss Loras’ betrothal to Cersei Lannister. Loras says without Tywin to force the issue, they’ll never marry, leaving Cersei at King’s Landing hovering over Margaery. Margaery only says “perhaps.”

At Pentos, Varys tries to speak to Tyrion again. Tyrion asks why Varys set him free. Varys tells Tyrion it was because Jaime asked him to. Tyrion knows that’s not the whole story. Varys said he did it for the Seven Kingdoms. He believes Tyrion has a part to play in the coming war. Varys says he wants peace and prosperity, a land where the powerful do not prey on the powerless. Tyrion brushes it off as fantasy. Varys says that, while Tyrion will never sit on the Iron Throne, he could help someone else get there, someone stronger than Tommen but gentler than Stannis. Tyrion wishes Varys luck finding him, and Varys notes that he said nothing about it being a “him.” He invites Tyrion to join him in travelling to Meereen to meet Dany.

Daario and Hizdahr return from Yunkai with what they believe is a victorious compromise with the Wise Masters. The Masters agreed to a council and to bring important matters to Dany’s court, but they want the fighting pits reopened. Dany refuses.

Later, in her bedroom, Daario tells Dany she should reopen the pits. He tells a story about his mother, a whore who grew less profitable as she got older and sold him into slavery. He ended up in the pits himself. He says he’s only here with Dany because of what he learned fighting in the pits. Daario says he’s the only one not too afraid to speak truth to Dany. He says that once she’s made too many enemies, and once she shows weakness they’ll strike. He says she needs to show her strength with her dragons, but Dany doesn’t want another child dead at her feet. She says no one has seen Drogon in weeks, and that she can’t control them anymore. He says a dragon queen with no dragons is not a queen.

Dany enters the chamber where the she left her remaining two dragons. She calls to Viserion and Rhaegar. One snaps at her and they both begin spewing fire. She flees.

Jon finds Mance at the Wall. Mance already knows what Stannis wants, and he isn’t keen on the idea. Mance says he doesn’t want his people bleeding for Stannis. Jon says he knows Mance brought his people south because they won’t survive the winter coming north of the Wall, and that bending the knee can save them. Mance remains ready to die. Jon says they’ll burn him alive. Mance says it’s still better than betraying what he believes in. Mance says if Jon can’t understand why he won’t enlist his people in a foreigner’s war, there’s no point trying to explain it. He says that all he ever wanted was the freedom to make his own mistakes.

Mance is walked out of his cell towards the burning post. Stannis offers his terms to Mance again. Mance says the Wall was his home for many years, and wishes Stannis good fortune in the years to come. Mance is tied to the post. Melisandre gives a speech about the light and the darkness, good and evil, true god or the false. She lights the fire as the Night’s Watch, Stannis’ people, and the Wildlings look on. Jon has seen enough and walks away as Gilly buries her head in Sam’s shoulder. Shireen closes her eyes and Selyse smiles. Tormund fights back tears. Suddenly, Jon fires an arrow into Mance’s chest, and he dies before the fire can take him.

Game Of Thrones Season 5 Premiere: The Wars To Come Recap With Spoilers