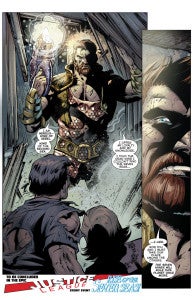 In Aquaman #25, released today, Geoff Johns wrapped his best-selling and critically-acclaimed run on the character--only to plant the seeds for an Aquaman-centric Justice League event that will reunite Johns with some of the characters and concepts from his Aquaman run in DC's flagship title.

You can see the final page at right, courtesy CBR. In it, Orm and Erin are accosted by Nerus, King of Xebel -- the Second Sea -- who reveals that he knows the locations of the Seven Seas. It's his plan to reunite the kingdom and take over the world.

"We are introducing this mythology piece called the Seven Seas in my last two issues and that's going to continue into a big Justice League story next year," Johns said on this week's DC All Access. "It warrants Aquaman getting help from the Justice League. It's too big for him to handle alone, so the seven seas, the seven members of the Justice League -- it's all going to be a nice, big story."