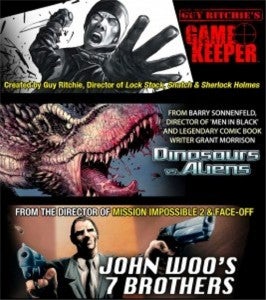 “Liquid Comics aims to be a home for great creators across film, television and comics to collaborate together on new ideas and bring them to audiences through the visual medium of graphic novels and interactive entertainment,” commented Sharad Devarajan, Liquid Comics Co-Founder & CEO. “The Liquid Comics app for the iPhone and iPad allows us to share these creators stories with potentially millions of people through one of the most compelling visual devices ever created.”

The “Liquid Comics” application is free and it includes some free content and some additional content that can be purchased. Here is a list of the current comic books being offered.

John Woo’s “7 Brothers,” - from John Woo (Mission Impossible 2, Face-Off) and comic book creators, Garth Ennis and Jeevan Kang. Seven Brothers tells the story of how six hundred years ago mighty Chinese treasure fleets set sail to reach every continent. Now in modern day Los Angeles, an ancient prophecy must be fulfilled and seven men with nothing in common but their destinies must face the Son of Hell to save the world.

Barry Sonnenfeld's “Dinosaurs vs. Aliens” - from Barry Sonnenfeld (Men in Black trilogy), and comic book creators, Grant Morrison and Mukesh Singh. The story for Dinosaurs Vs. Aliens is based on a secret world war battle that was never recorded in our history books. When an alien invasion attacks Earth in the age of the dinosaurs, our planet’s only saviors are the savage prehistoric beasts which are much more intelligent than humanity has ever imagined.

Guy Ritchie's “Gamekeeper” - from Guy Ritchie (Sherlock Holmes, Lock, Stock,…) and comic book creators, Andy Diggle and Mukesh Singh. Gamekeeper is a tale of epic espionage.  Brock is a reclusive, enigmatic, groundsman who lives a quiet existence, until mercenaries invade it and destroy any remnants of his life he has left.  Now, set on a path of vengeance, it becomes difficult to tell who has more power, the man, or the animal within.

Shekhar Kapur’s “Snakewoman”, created by Shekhar Kapur (Elizabeth, Four Feathers) and comic book creators Zeb Wells and Michael Gaydos. Jessica Peterson is learning first-hand that the cycle of revenge cannot be broken. Without understanding why, she finds herself turning into a creature - a vicious Snakewoman. Her mission - to avenge a centuries old wrong that was conceived half a world away. Jessica must confront the monster that lurks inside her before it is too late.

Marc Guggenheim’s “Nowhere Man”, created by Marc Guggenheim (Executive Producer of the hit television series, “Arrow”), What if you could have the world of your dreams...and all it cost you was every thought you ever had. A futuristic thriller set in a world where the government monitors everything - including your most private thoughts.

After being released, the “Liquid Comics” app quickly rose to number 4 in the App Store charts under iPhone free book apps. The app is available now for download at https://bit.ly/liquidapp.