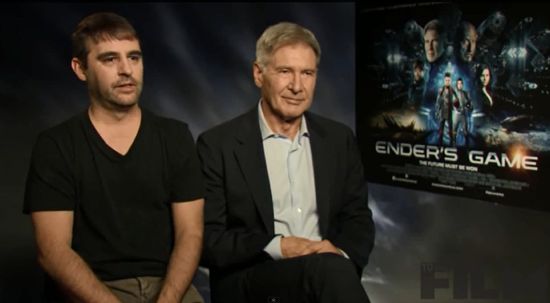 Whenever someone asks Harrison Ford about Star Was Episode VII, he goes silent. In fact, he usually looks away from whoever is asking the question and pretends that he doesn't realize they are talking to him.

However, whenever Harrison Ford is asked about any other movie, he's more than happy to weigh in. When asked by Graham Norton if he would do another Indiana Jones movie, Ford said, "In a New York minute, yes. I don’t think there is any barrier to Indiana Jones being an old fart."

Most recently, Ford was doing a video interview with Total Film, along with Ender's Game producer Robert Orci, who is also writing Star Trek 3. When the Total Film interviewer asked Orci about Star Trek 3, he turned to Ford and said, "Will you be in that?" Ford replied, "Sure."

While both men were almost surely joking, it is interesting how Ford will seemingly agree to any movie when asked, but he won't talk about Star Wars Episode VII. Does anyone really think that an actor who agreed to do Anchorman 2 and The Expendables 3 is really going to turn down Star Wars Episode VII, one of the biggest potential blockbusters of all time? Heck, we wouldn't be surprised if he really does wind up doing Star Trek 3 as well.