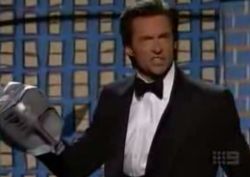 As the star of the upcoming X-Men Origins: Wolverine movie, Hugh Jackman wasted no time in letting comic book fans know where he stood on the great Academy Awards comic book movie controversy. In Jackman’s opening number for the Academy Awards, he made several references to comic book movies. After leaping aboard a batcycle, Hugh Jackman sang “How come comic book movies never get nominated? How can a billion dollars be unsophisticated? Everyone went to see The Dark Knight. What am I doing you think is not right? Is it my cape or my bullet-proof tights? Maybe, if I aged backwards.” Hugh Jackman’s words highlighted a number of questions that have plagued comic book fans. The most obvious question being how a movie that was as successful at the box office as The Dark Knight was not considered one of the best movies of the year by the Academy. Is the idea of a man dressing up as a bat and fighting crime any more absurd than a man aging backwards? Later on in the opening number, Jackman sang “The Reader, I haven’t seen The Reader. I was going to see it later, but I fell behind. My batmobile took longer than I thought to design. The Reader, I know I need to see The Reader. I even went down to the theater, but there was a line of all the people watching Iron Man a second time.” When news first broke that the Academy members had snubbed The Dark Knight for Best Picture, many comic book fans expressed outrage that The Reader made the list. Jackman’s words made light of the fact that very few people have seen The Reader, and he once again highlighted the fact that comic book movies were overlooked by making reference to both The Dark Knight and Iron Man. Finally, Jackman concluded his opening number by singing “These are the Oscars, and this is my dream. I am a slumdog. I am a wrestler. I’ll rent The Reader. I’m Wolverine.” Again, Jackman re-established that The Reader was not a popular movie, referring to it as a movie that he’ll rent later. Jackman also re-connected once again with comic book fans by ending with “I’m Wolverine.” While Jackman’s opening number was done tongue-in-cheek, it also sent a very real message about the Academy’s disconnect with the movie-going public. Instead of nominating The Dark Knight which made a billion dollars or Iron Man which people waited in line to see twice, the Academy nominated a movie called The Reader, which most people will wait until it comes out on DVD to watch.