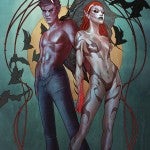 Magic is in the air at DC this week, as the last week of the DC universe relaunch rolls out, several books dealing with the supernatural, the alien and the mystic were released. After reading over Justice League Dark #1, I felt like I was ready to turn my attention now to two more books in the same ballpark as that one, I, Vampire #1 and Voodoo #1. While Voodoo deals more with what appears to be alien life on Earth, I'm putting it with my review of I, Vampire due to the concepts that both suggest. We see in both books a world in which superheroes are not present at this time, but forces that appear to want to attack and push back against these forces do. Starting with I, Vampire, I have to say that this book surprised me a little. I've become sort of jaded towards most vampire tales, stories, arcs, etc. since the whole Twilight phenomena had a bit of a ripple effect in pop culture, where it feels like any vampire related project can trace its lineage back to those books and films. Believe me, I have nothing against vampire stories as a whole (my undying love for Buffy for example) but it's become a convenient element recently. This book offers a little bit of a different perspective. I, Vampire is narrated throughout by Mary and Andrew, a vampire couple who have spent the last 400 years together. They seem to suddenly be arriving at a stronger difference of opinion than before, with Mary advocating taking on the superheroes of the world in her quest to have the vamps inherit the Earth and Andrew hoping to talk her down from it, even saying that they are evil by creation. I really felt that Andrea Sorrentno's art and Marcelo Maiolo's colors made the issue. It's painted in a wash of jagged lines, brown tones and grays that gives the issue the dark feel it needs. It's clear that Mary has a plan, and we get a taste of the traps she laid in this issue for Andrew. I felt myself struggling at times to keep it all straight, even after a couple of readings, as the story blends past and present together. I'm intrigued enough to give it a second issue, and the art does do justice to the concept. Grade: B 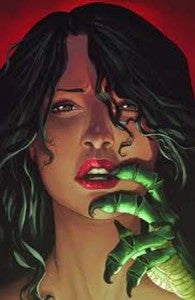 Voodoo on the other hand really had to work to gain my attention, unlike the stripper by the same name who opens the issue dancing on stage. She instantly had the men throwing money at her by the fistful, all the while a mysterious pair of agents from some government organization (aren't they always) watches her. The female agent gets indignant and leaves, leaving the male to watch the bumping and grinding go on. During conversation backstage, the fellow dancers don't learn much about the new girl, except that she speaks in vague answers such as "I have much to learn" and so on. The male agent buys a lapdance with Voodoo, which is the name the most popular girl earns in the bar of the same name. During the dance she tells him about her life in an unbelievable way, suggesting that the script for this book came from an early draft of Showgirls . Even though the agent doesn't buy a word of it, why would she volunteer the info so easily and lazily? The ending was a bit of a shock, where we DO learn that aliens are not always peaceful, but it doesn't make up for an overall slow issue. Grade: C