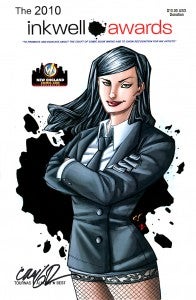 The Inkwell Awards, a nonprofit organization that celebrate the art of comic book inking and finishing art, reported earlier today that they had a box full of fundraising materials stolen in the mail. The package included dozens of their Donation Books, including variants and signed editions, which might be easy to spot if the show up in large numbers on the secondary market. Keep an eye out for it and, if you're a retailer or fan approached to buy this material, it might not hurt to contact the organization.

Here's the Inkwell message, as reported by the Organized Readers of Comics Associated's Facebook page:

STOLEN! Got back parcels of our Inkwell Awards materials following Heroes Con from the USPS and one box was empty although it had the stamp for $13.44 and had been resealed.

Problem is we didn't insure the box so I could only get the postage reimbursed and place a report with the inspector general.

This may not seem like much but we're still a small non-profit with a meager budget at best so this hit after so many recent financial losses are crippling to the organization. I won't hold my breath but hoping for a miracle. Developing....