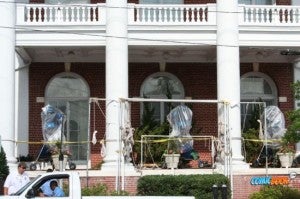 The last couple days have been very eventful for Iron Man 3. Filming is underway in Wilmington, North Carolina, and Comicbook.com brought you some scoop from the Cape Fear Club filming location. Here are five things we learned about Iron Man 3.

Mandarin Is A Villain – While it’s been rumored for awhile, Comicbook.com was the first to report that sources close to production had confirmed that the Mandarin would indeed be a villain in Iron Man 3. Ben Kingsley will be playing the Mandarin, but no info yet on if the character will be altered from the comic book version for the movie.

Iron Man 3 Will Be Set Partially in Miami – It had already been revealed that part of Iron Man 3 would be set in China, but it’s been a mystery as to what the United States setting would be. Even though filming is taking place in Wilmington, North Carolina, it’s not a big enough city to serve as the setting. Comicbook.com learned that vehicles with city of Miami and Miami police department logos had been spotted being unloaded on one of the sets.

Twins Involved In Iron Man 3 – One source told us that the Mandarin would have a set of twins doing his dirty work. It was the first time we heard the twins rumor, but as one reader pointed out the Caged Heat casting page had posted a notice calling for twins. We’ll leave this as rumor for now, but considering the casting notice, maybe there's something to it.

Iron Patriot Is A Villain In Iron Man 3 – No one saw this coming. When it was revealed that James Badge Dale had been cast as Eric Savin, everyone assumed he would be playing Coldbood. That was until James Badge Dale was photographed on the Iron Man 3 set decked out in Iron Patriot armor. Of course, some think it might actually be Detroit Steel armor.