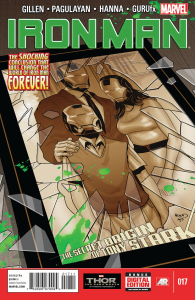 What if there was a major retcon in this week's issue of an A-list superhero's book, and nobody talked about it?

That's what happened this week, when Tony Stark finally discovered the "Secret Origin" they've been teasing for him all this time...and nobody in the entertainment press picked up on it.

Today, then, Marvel Comics took the news to the Associated Press and shopped it around to a number of mainstream media outlets, who reported on the shocking fact that--

...Tony Stark is the adopted son of Howard and Maria Stark, and their biological son, Arno, has been in a hospital his entire life.

“When you discover something about yourself, you reprocess. How does it churn in the gut? How do you re-examine your life?” said series writer Kieron Gillen. “It’s a completely different prism in how you study yourself.”

“When Kieron pitched the story, the bottom line question for us was ‘Does this open up the doorway to stories that are worth telling?’” said Marvel Editor-in-Chief Axel Alonso. “And it does. Who are Tony’s parents? Will he want to know them? How will he feel about Howard? How will this affect the dynamic between father and son?”

The move won't change Tony's place in the Stark family or in the Marvel Universe, say the creators behind the decision. It will simply cause him to re-evaluate how he sees himself and his parents--and of course provide some storytelling opportunities around his brother.

The issue went on sale yesterday. Expect a sell-out now that people have been alerted to the content.

Iron Man's Backstory Gets a Major Overhaul in This Week's Issue