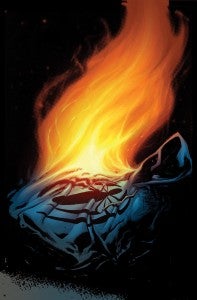 You gotta love San Diego Comic-Con. Close your eyes and you miss the latest surprise. Such could have been the case for a lot of folks that didn't attend the Spider-Man panel today. Toward the end of the panel, Marvel showed an image of what appeared to be the Scarlet Spider's costume set on fire.

For those of you that don't remember (or weren't aware), the Scarlet Spider was Peter Parker's clone, Ben Reilly during the 90's Clone Saga. Reilly wore a blue costume that included a hoodie.

Why the image showed the costume on fire, I have no idea. And I don't care. I just love the fact that Marvel refuses to be one-upped by DC in the story twist department. Competition is good. Can't wait to see what the rest of SDCC holds.

Is Marvel Bringing Back the Scarlet Spider?