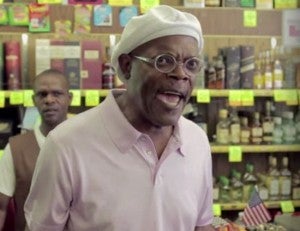 With headlines that the Venezuelan President had blamed Spider-Man for violence in his country, we felt that this new Funny Or Die video was especially timely. It reminds us all that instead of blaming Spider-Man, it's really Avengers star Samuel L. Jackson's fault.

In the video, various fans blame all their kid's problems on watching Samuel L. Jackson movies. For instance a convenience store clerk tells Samuel L. Jackson that he was great in Unbreakable, before complaining, "Too bad my kid's a supervillain that commits heinous crimes for his own sick amusement."

After listening to numerous complaints, Samuel L. Jackson finally says, "I know I play some bad dudes in movies, ok. But if my pictures on the poster, then maybe your kid shouldn't watch it. Don't you people read the descriptions of these movies before you show them to your kids. Huh? Look at the ratings! That's your responsibility. Not mine!"

Everything is Samuel L. Jackson's Fault from Samuel L Jackson
Start the Conversation

It's All Samuel L. Jackson's Fault!