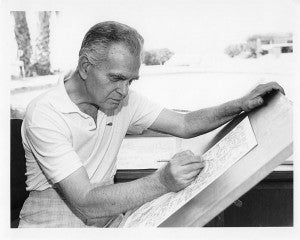 The Hero Initiative announced yesterday that they will celebrate Jack Kirby's 95th birthday--coming up next Tuesday--by recruiting a hundred comic book artists including Hack/Slash creator Tim Seeley and Rumble Girls' Lea Hernandez to "wake up and draw." Seeley and Jack Kirby's son Neal, whose daughter Jillian recently kicked off the "Kirby4Heroes" campaign, star in a video you can watch below to kick off the "Wake Up and Draw" event. The idea is that the exercise will help foster creativity, as artists get out of bed and get to work drawing a birthday card for Kirby which will be featured in a special gallery on Comic Art Fans. Readers interested in keeping up on the project can follow the progress of the artists Tuesday by keeping an eye on the Twitter hashtag #wakeupanddraw. "By supporting the Hero Initiative through the 'Kirby4Heroes' campaign and 'Wake Up and Draw,' comic book fans can honor my father on his 95th birthday in the same manner that he would have," Neal Kirby said. The Kirby4Heroes campaign kicked off by his daughter revolves around comic book retailers who have agreed to donate a percentage of their earnings on August 28 to the Hero Initiative. She, too, has a YouTube video in support of it, which you can see at the bottom. It's produced by the fine folks over at Nerdist. "Though my grandfather Jack unfortunately died the year before I was born, I am surrounded by books, artwork, and of course family stories and anecdotes so much that I feel like I've known him my whole life," said Jillian Kirby. "Even though I never had the opportunity to know him personally, I have learned my grandfather was a very giving and charitable man. I know my grandfather would have been the first to lend the Hero Initiative his support."