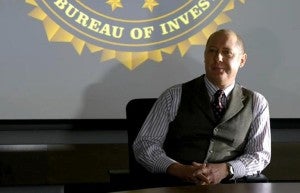 , this year's second-highest-rated drama premiere and one of the year's biggest hits, has been picked up for a full season. The series, which stars Avengers: Age of Ultron's titular villain James Spader, was originally picked up for 13 episodes with an option for a back nine to round out a standard 22-episode season of network TV. Today's move confirms what most had suspected; that the series will last at least at least 22 episodes, and will likely be picked up for a second season next year. "I'm hoping that it's gonna be a fairly smooth transition, but I don't know," Spader recently told Collider when he was asked whether playing Ultron might bump up against his primetime slot. "We'll wait and see how long The Blacklist plays, and whether it plays a full season or not. If it plays a full season, then I'm sure I will be packing my bags on the last few days of our production on The Blacklist, in preparation to get over to London to start shooting The Avengers." In The Blacklist, Spader plays a dangerous criminal recruited by the FBI to help bring in other baddies--but there's an undercurrent of suspicion that everything he's doing is a mind game to serve his own ends. With Breaking Bad just wrapping up, many critics have noted that Spader's series gives fans another villain to root for. "The many layers of Red Reddington and his mysterious reasons for getting into bed with the FBI seem to be fascinating to fans of this show," said NBC Entertainment president Jennifer Salke. Earlier today, ABC made the first cancellation of the season, axing the lottery-winner comedy Lucky 7; that series, along with Trophy Wife, were among the hardest-hit when the network's ratings plummeted across the board last week when Marvel's Agents of S.H.I.E.L.D. dropped more than 30 percent and failed to retain its hold on the night, losing out to an episode of NCIS.

James Spader Drama The Blacklist Gets Full-Season Pickup at NBC