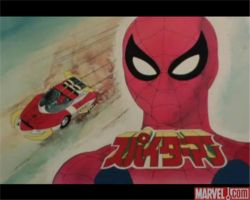 Fans of Spider-Man and giant monsters attacking Japan- rejoice! The first episode of a live action Japanese Spider-Man TV show is now available to watch for free on Marvel.com. The show, which debuted in 1978, was produced by the Toei Company after Marvel gave permission to use its franchise superhero, Spider-Man. Toei’s Spider-Man wears the familiar red and blue uniform and has the ability to shoot webs from his hands and climb walls. But the similarities to Marvel’s webslinger stop there.

In the Japanese version’s premiere episode, entitled "The Time of Revenge Has Come! Beat Down Iron Cross Group," motorbike star Takuya Yamashiro is given the powers of Spider-Man from an alien who injects him with a spider extract. The alien also gives this Spider-Man the ability to use the Marveller, a gigantic robot that looks an awful lot like Voltron. With his new powers, Yamashiro must defeat Professor Monster, a cyborg alien who turns toys into large monsters that attack Japan.

Both DC and Marvel have had Manga fever over the past year and have been attempting to cash in on this ever- popular genre of comic books. Last year, Marvel released Spider-Man J: Japanese Knights digest, a collection of Manga tales first published in Japan and later printed in copies of Spider-Man Family in the US. More episodes of the Japanese Spider-Man are expected to be posted on Marvel’s website in the coming weeks. The series ran for 41 episodes from 1978-1979. The complete series was at one time available on DVD as a 7-disc box set.

Doctor Who: New Details on Christopher Eccleston's Return to the Ninth Doctor