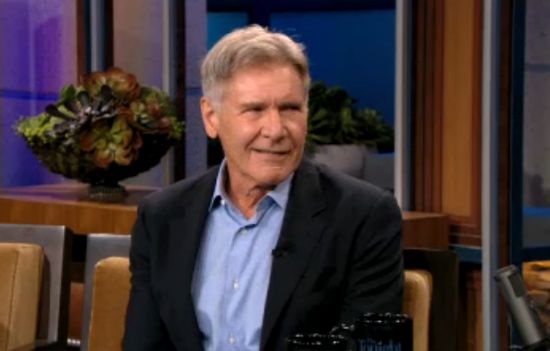 With our theory that a Star Wars Episode VII announcement is scheduled for October 30, we checked out the Tonight Show with Jay Leno to see if Harrison Ford might drop any Star Wars hints during his appearance.

After making small talk about other stuff, Leno said, “My entire staff all day they’re obsessed with Star Wars. The rumor is that you’re going to be in the new Star Wars film. Is that correct?” Harrison Ford just scowled, turned and looked away.

Leno continued, “I tell you what. If you don’t want to answer, can you give me a nonverbal [sign]. If you’re going to be in the movie, look pissed off.” Then, Ford turned and smiled. Leno quipped, “That could be pissed off for you. I don’t know.”

Leno persisted, “Can you say anything about it at all?” Then, Ford stuck out his tongue and moved his lips like he was silently talking. Leno said, “Oh, you’re going to be in the movie. That’s fantastic.” Ford then went back to his angry look.

Check out the video below of Leno grilling Ford on Star Wars.